It depends on a lot of factors, including map, civ matchup, and elo. For most civs, you want to either open archers or scouts depending on your civ, so a Feudal rush probably, although it is situational, and a lot of things could work. I would suggest something like M@A into Archers instead, but you sound like you are just starting ranked, so opening straight archers, scouts into knights, or maybe fast castle knights will probably be your most effective strats. For a map like Arena, you probably want to learn a fast Castle build, and then probably boom from there, or maybe Castle drop the enemy.

I think these times your best way to get better is by playing agressive.
Chose one civ. Learn the build orders, learn to makro. This should be the easiest way getting into it.

Franks are probably the best choice as many buildorders are build around them but you don’t have to learn anything fundamentally new when switching to another cavalry civ. (If you want to get better I don’t recomment using the so called “beginner civs” like lith or huns cause they make it a bit too “easy”.)
For archers maybe britons are the best to get into for similar reasons, and you can then learn to defend a boom at the same time while learning how to use archers.

The answer on this question is ‘it depends’.

If your goal is ‘just having fun’ then do whatever you like.
If you want to improve in the game, then try to learn some builders which fit the map you like. On open maps you go for agression asap. For closed maps you want to go for a fast castle build. Depending on the game you want FC into boom, FC into castle, … Lots of different options to pick from.

A build order is always something from the start. After a while you need to adapt based on the strategy of your enemy. So think ahead of what you enemy might want to do and come up wiht a plan on how to counter them. It is all about adjusting to what your enemy is trying to do and finding the optimal strategy in your case.

Things also depend on your civ match up. Every civ peak at different times into the game. Sometimes your goal is to go to castle asap on open maps, because there is the strength of the civ match up, but your enemy might want to go for a feudal push. In that case you really need to hold the pressure in feudal age, before you can click up.

In the end the game is a really advanced rock paper scissor game in which you have to pick the game best suited for that situation.

The easiest archer civs to learn are probably Britons, Mayans and Ethiopians. For any of those, opening straight archers, or men at arms into archers is good. If you want to play cav, picking Franks, Berbers or Lithuanians might be easiest for knights, as well as scouts. Those are the two biggest openings. There are more civs that are good in each category, like Vikings can also be a good archer civ, and Huns can be a good cav civ, but those 6 should get you started. 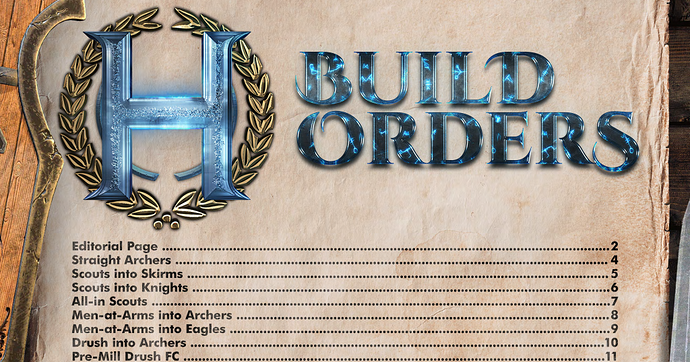 Here you find some Bo’s of Hera. He also talked about when they are useful.

Alright Ill look into this. Thank you!