Nomad, Megarandom and Hideout are all maps that go in and out of rotation even though data suggests they are more popular then Black Forest in teamgames. 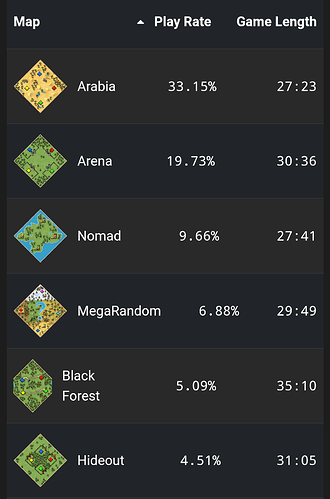 Now this data is from the patch before the new expansion and shows Hideout to have a slightly lower playrate then Black Forest. However, Hideout was only sometimes in the mappool. If it could have been voted in more it would certainly be higher.

Btw. this data is across all Elo ranges but the positioning is similar in all ELO ranges…

To me this does not make sense.
Why are the more popular maps on rotation while Black Forest is permanent?

This is proving statistically that the current map voting system does not deliver the most wanted results!

This is proving statistically that the current map voting system does not deliver the most wanted results!

Not really, there’s a bias in that. You are comparing maps which are available only for a limited time to a map permanently in the map pool. People liking both of the maps will most likely prioritize playing the non-permanent ones, as they may be gone once the next map pool is released, while black forest can be played whenever, since it’s always there.

It would make more sense if you were comparing permanent to permanent or rotating to rotating maps.

While it is true that there is a slight bias for those maps when they are in rotation there is an even stronger bias for black forest when they are out of rotation (because they cannot be selected at all).
I thereby stand by the claim that they are statistically more popular then Black Forest.

I am not so sure about megarandom, but I also would very much prefer to have nomad as a permanent map…I think it’s one of the most popular maps for team games.

That’s so tricky, it’s true nomad or MR have more play rate than BF, but BF is so much banned than the other two maps, most banned maps are “troll” ones like socotra, BF and arena, arabia too but less percentage. So if you have BF banned and other player bans arena/arabia for example you will probably play nomad, hideout, MR or something like that not because people love the map, just other maps get banned before these ones.
Before DE BF was the third most played map, just behind arabia and arena, really close arena and BF must say, just because people hosted games with the map they wanted, not a map pool

Lobby rooms are still there and no doubt BF is played a lot in them. The overlap between people who play BF and people who play ranked just isn’t huge. So the map shouldn’t be permanently available in ranked play.

arena and black forest should both be in a separate queue. standard RM should be for maps where all the ages of the game matter

This would be possible if more people would be playing the game. AoE2 is on a good path but right now either the waiting time or Elo range would increase significantly if there where different ranked ques…

even though i detest BF, i think its permanency is justifiable to appeal to the specific minority and encourage them to play ranked… BUT what isnt justifiable is when BF is not swapped out when we have mothertrucking amazon tunnel(vomit) and a bunch of other closed maps in the SAME pool. then its just dumb, there’s no way that pool appeals to the masses

btw shout out to cnc:generals “something for the masses”