A Battle Elephant UU is missing

Just an idea, but a Battle Elephant UU could be cool. It could have just better stats (like Magyar Hussar vs regular Hussar), or improved speed, or a mechanic like Cataphracts where it has positive armor class vs Halberdiers. You could even, in principle, make this UU weak to something like Skirmishers but resilient to Halbs, requiring the opponent to mix 2 units to beat a mix of this and the regular Battle Elephant army composition.

Just this seems like rly low-hanging fruit for a UU so I thought I’d share it. Incidentally as a small addendum, I’ve become convinced after long thinking that the regular Battle Elephant could also take less bonus dmg from pikeman. As far as I understand, how they take 2x bonus damage, once from Cavalry armor class and once from Battle elephant armor class, resulting in something like 50 damage per hit. I do think this is reasonable given their massive HP and how Pikeman should stay a counter unit, however I think the Battle Elephant armor class damage could gain a +5 resistance or something along those lines, this wouldn’t be a thing for War Elephant so War Elephants would still be balanced but Battle Elephants would be a bit better in early Castle age.

Battle Elephants need their own armor class, so they don’t take the crazy extra damage from the spear line. They should take more bonus damage than regular cav, but not 60 extra from halbs.

How would that differ from a persian uu? Both are melee elephants.

He is saying battle elephant. So I’m guessing less HP but faster speed.

So how would jt differ from battle elephants?

IDK. Maybe the bonus armor as he is suggesting. Or even more speed.

It could have just better stats (like Magyar Hussar vs regular Hussar), or improved speed, or a mechanic like Cataphracts

What we can add is a elephant archer uu(ranged elephant unit)as the khmer one is more like a siege weapon on an elephant.

If you mean things like elephant gunpowder unit or Skirmisher elephant those aren’t battle elephants.

Sure, neither are Battle Elephants, but that way you could also say many UUs of normal units are missing.

If you want a battle elephant with a unique gimmick that changes how they are used unit, play literally any elephant civs. Malay have very cheap elephants but only have the first armor upgrade making them weak to archers. Burmese have UT that give them +2/2 and +5 against archers making them good vs archers. Vietnamese are even more tanky, Khmer have more attack and speed allowing you to be more aggressive, Bengalis are resistant to monks and BD, and Dravidians are useless because they are missing all of their upgrades.

Some day, I hope Tais will be added as new civ (umbrella for all Tai peoples). And they could have a White Elephant as UU. 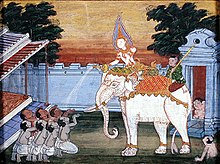 A white elephant (also albino elephant) is a rare kind of elephant, but not a distinct species. In Hindu puranas, the god Indra has a white elephant. Although often depicted as snow white, their skin is normally a soft reddish-brown, turning a light pink when wet. They have fair eyelashes and toenails. The traditional "white elephant" is commonly misunderstood as being albino, but the Thai term chang samkhan, actually translates as 'auspicious elephant', being "white" in terms of an aspec White...

Perhaps, they could be completely immune to conversion or have a very high resistance (e.g. like Scout cav line) while also being faster than Battle Elephant? Don’t know if and how this could be viable, but I would love to see “white” elephants, which even made it to the official flag of Siam for some time

Overall I agree, there is room for such a unit.

If you want a battle elephant with a unique gimmick that changes how they are used unit, play literally any elephant civs.

This is the main counterpoint though, that each civ’s BEs are different enough that they almost play out like different units (not entirely, as they have the same base function) and there isn’t really a “standard” version of the battle elephant. The need for further unique elephant units is also arguably undermined with the siege elephant, which has an entirely different set of strengths.
Even so, something like a cannon elephant is still an option for future civs.

We already have 2 foot archers with bows and 2 with xbows.what we lack is a skirmisher type uu.

That also works. Skirmishers are also archer according to game. An UU archer with minimum range sound kinda underpower though.

What meant was we dont have a uu that is visually a spear throwing unit like a skirmisher.Skirmisher type ranged unit we already have as viets.

An UU archer with minimum range sound kinda underpower though.

How can you even say that

What if it did 7 base damage? Is it still underpowered?

What if it does pass through damage(1 tiles) at the target? Is it still underpowered?

Essentially a ranged ghulam with a minimum range. There’s probably 100’s of iterations that would make both a balanced and unique unit. But yeah " sound kinda underpower though"