A few ways to improve the scenario editor

I like your suggestions and will be adding them to the list! I’d oppose combining the two conditions Object Visible/Object Not Visible, though, because it would break the backwards compatibility with older maps that use both conditions, and there’s a ton of them. Although, if DE automatically turned those older “Object Not Visible” conditions into the new “Object Visible” with the inverse chechbox checked, so that older maps still work as intended, we could both have our cake and eat it.

I’m not suggesting removing the existing triggers, It’d make much more sense to just hide the Not Visible condition from the trigger list, so it stays in the game for compatibility’s sake, but when used in the editor you only have the combined option.

Alright, that makes sense. I guess the devil’s in the details here; you could have the condition hidden for new scenarios, but still visible in the conditions list for older scenarios that already use it. You could even have a line in the effect description saying: “This is a legacy Condition from an older version of the game. To create the same effect in a new scenario, use the ‘Object Visible’ condition and tick the ‘Inversion’ box.”

There’s a “Khan” unit that should be a Hero.

Also, it should be noted that “Farmer” and various other “villager job units” appear in the trigger effect’s unit list when using “Modify Attribute”, but this Farmer is only the Male farmer, we have no option to select the Female farmer without modding the data to reveal her, which with 2DE is really hit-or-miss if it will actually reveal the unit properly.

Can we have a way to set a players starting resources to infinite or random?

I’d also like to point out that 2DE is dangerous to use with any map that contains certain hidden units that used to have graphics, but now do not, such as Berserk, Heavy Swordsman, OMTBO, STRBO, etc etc.

Modify Attribute with Projectile Unit just straight up doesn’t work. it does something weird to the ID number and it doesn’t correlate to the actual projectile ID.

I’ve also worked out how to make any unit visible in the Editor, and it requires each unit having a string ID. Why do internal names no longer work for the editor?

Some new additions, many courtesy of amuralshoq’s thread: The new scenario editor has many changes that broke old Maps from AOE 2 HD

LordBasse, also eye candy like trade goods - furs, honey, weapons, silks, porcelain, tea, lacquer, meat, etc. I have some ported over from other games but am not sure how to incorporate them without the SLP converter for AOE2:DE. PM me and I can share these.

I would like to see a trigger to allow garrisoning in a unit or building that does not garrison, and another one to give a new type of attack to a unit, E.G. give a melee attack to a king. Of course, that second one would then be weird because you would also want them to have an attack animation, so I can see how that would be a bit of a big change. You could also take away attacks entirely, like just have a war wagon that no longer fires any bolts, effectively turning a military unit into a civilian one.

But I think the first one has plenty of reason to it. In a scenario, maybe you want to garrison a few troops on a war galley or, tying in with the first one, a war wagon (then it just becomes a carriage). You can already garrison inside houses for one civ, so it is not too far of a stretch. You would definitely want to have options for restrictions too, as with TCs and towers only taking in pedestrians, castles not allowing in siege, and transport ships taking all units. It would just be really cool to have a galleon or carrack that was also able to carry troops.

Also, could we get coop scenario editing? It would make the process a lot faster and more fun if two or more people could work together on a scenario. I have a few scenarios I am that I would love input from a friend on.

Will be updating this thread further after Christmas, but I would just like to chime in and say that co-op mode for the scenario editor would be absolutely brilliant, although I realize it is probably a complex project to take on and not at the top of the priority list. Still, it would be awesome!

My last post seems to have been… removed? How come?

Here it is again, anyway:

Having done some proper designing in the editor now, I have come across a number of new issues. I’ve also heard about a number of other bugs that have been reported in this thread. Here are the new additions:

You know, it would also be really nice if we were not restricted on units in different ages. Why would I not want to be able to place a fortified gate in Castle age, or a militia in Imperial? In a scenario, we are doing all sorts of strange things, and this would just make it all the easier.

Some new issues I have found after trying to design a proper map:

Also, I mourn the demise of the Contraption unit.

Contraption unit? Any picture of it? 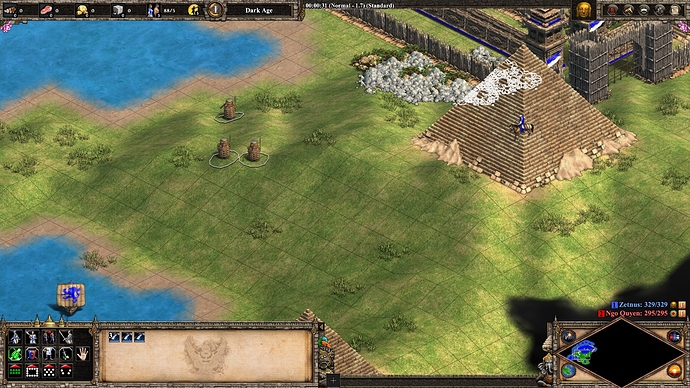 I am hoping for the introduction of more types of forage bushes - date palms, olive trees, grape vines and eye candy crops we can place on farms to show crop diversity like wheat, pumpkins, lettuce, watermelons etc…