Hello, let me nerd out about this:

Let’s guess which units of each category has the highest attack per strike out of all.

-Try any unit from any civilization (revolutions too) with any deck of upgrades, BUT NO NATIVE CIV UPGRADES (Unless available from shipments).
-No mercenary units unless directly from upgrades or shipments (Cause random won’t cut it here).
-Aura buffs from the civ units count.
-MULTIPLIERS WON’T COUNT
-We ain’t counting dps or dps per cost this time, just pure overkill damage per hit.
-No ally can help ye.
-For the heck of it, let’s count promotions and charged abilities as well (Not the hero’s literal instakill, cause that deals 750 or above damage).
-We can leave siege attack for another post I guess (Not to confuse with siege damage (like the desert raider ya know)).

Pretty much nothing left at random.

COOL, I’LL START
From the Heavy Cavalry category I think the biggest damage per hit trophy would go to the “Hussar de la muerte”

With a few cards and the 10 Spanish priests, this guys can deal up to 107 melee damage!, Sadly, they get overwhelmed by the sheer power of the German “Totenkopf Hussar” 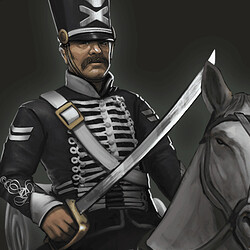 They deal 121 damage from their charged ability! Real nice, HOWEVER!

Everything else pretty much becomes st*pid if you just take 1 look at the flippin Shogun.

This guy with all auras and upgrades and yadayadayada, can make 336 damage on EVERY HIT…

Anyway, that’s that one, I suppose the one for light infantry would go to a USA Zoave, cya.

second place should go british Harquebusier, which is guaranteed accessible through the age 3 mercenary contractor. 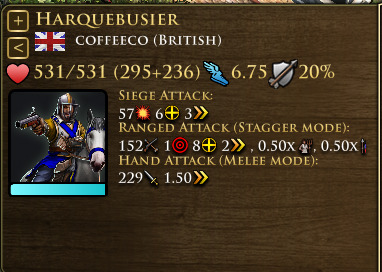 Woah, and you get 6 of those, that’s all you need for a sneaky raid

I would guess Hatamoto samurai with all of the auras are one of the hardest hitting heavy infantry units. 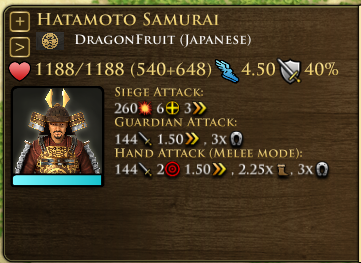