Unsurprisingly people are abusing the reporting system in game… Not that I need to justify why I resigned, but I resigned because we were losing and had negligible chance of survival. So my lovely ally tells the opponents to report me… 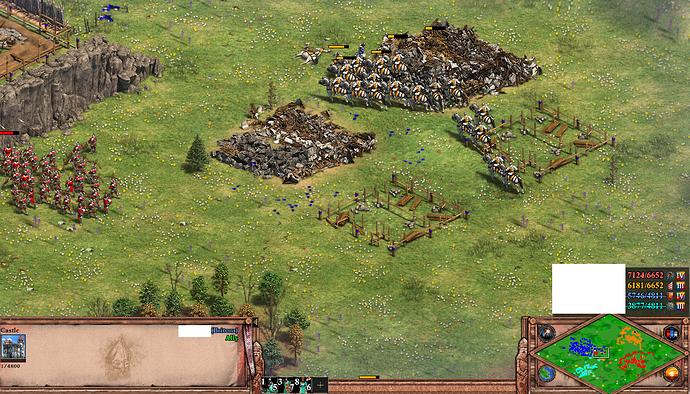 Opponent’s(arranged team) armies and scores. We had no armies left.

WTF is wrong with people when they think they deserve to report someone because they no longer want to play in a match? I’m sure the devs will ignore these types of reports so the report is just out of spite?

Resigning should be like in league of legends a team votong decision. Resigning early when the team wants to continue should be treated like in like off legends as rage quitting I n my opinion.

what happens in LoL if someone “rage quits” (which is extremely subjective) ?

Resigning early when the team wants to continue

and who gets precidence in a TWO player team?

and who gets precidence in a TWO player team?

Good point. What if your ally wants to troll and play hide and seek with villagers, while you are penalized for resigning once the game was lost?

in Starcraft 2, when a teammate resigns, the other players can still manage his units, and get a share of the resources gathered.

AoE2 is a brilliant team game, but the matchmaking still needs many improvements. there is not MMR for premades for example.

This is the MOST stupid thing to report a player for resigning… Without tournaments, the players do NOT receive any money to play that game. So they may resign at anytime.

If it was a Tournament with Prize money and some rules for resigning, the managers of the tournament may penalize some players and give them less money.

I mean, if the guy is trolling, you can.

in Starcraft 2, when a teammate resigns, the other players can still manage his units, and get a share of the resources gathered.

AoE2 is a brilliant team game, but the matchmaking still needs many improvements. there is not MMR for premades for example.

yeah definitely liked that part of SC… but so many people on this forum said its a bad idea bla bla, they would rather deal with the issues of “people resigning too easily” and try and over come that impossible mountain, as opposed to just letting us share factions

Score isnt really a good indicator of the match in all cases. At lower levels it is even worse. Score do give a rough indication and based on the screen i do think there isnt a big chance you can win this game.

I do feel being reported for this is kinda stupid. I hope the devs also agree with this and dont immedaitely ban you. I think if you are dropped frequently pretty early, that can be a reason to be banned, but then i am speaking about dropping when all players are still in dark age for example. I think this is totally fine to resign. Seems like you are already beating and now they turn to your ally and i think he wont have a big army to deal with the enemy.