Add a way to rotate the map

Sometime i find it pretty difficult to judge where stuff are(on mountain for example) even with grid mode.
Would it be possible to have a rotating function to see stuff in better angle.

I like the idea, but i feel like this is almost impossible to implement into the game.

If it is already technical possible (can the engine handle rotations?), you have the visial too part. Things like: You only see one side of a TC. If the map is rotatable, you needs pictures of the TC for each side. And not just the picture, but also from the collapsing, …

So i dont think this idea is really doable for the devs.

Hi
I think you misinterpreted something, i didn’t ask for everything to be rotatable, just the position of the map. So there should be no “behind” a TC since it’s only his position that is changing.If we keep the TC as reference,think of it as if you remove the TC from the map (as if it was a sticker) keep the mark of where it was, rotate it and put back the TC where the mark is.

The end goal is to be able to better understand where unit and building are situated.

The building graphics would be the same but his position would be somewhere else.
And technicaly it depend of how the dev built back the engine. If it’s really a “definitive edition” with the standard of 2020 then it should be doable.

That is impossible. If the devs had completely rebuilt the engine (as many people were hoping before release) this would have been possible. Unfortunately the game is still on the 20 year old engine and there is no plan to change this.

This is a 2d game. All models are sprites right now. (the original models might be 3d, but the models in game are not)

pharaoh is another 2d game based in sprites and the camera can be rotated. The buildings are kinda strage sometimes, but the possiblity is there.

Then they must have sprites for the buildings to look different from a different angle? Does the camera rotate like a full circle or it has only 4 angles to look from? Cause right now I don’t think there exists sprites from other angles for buildings on aoe, so you don’t want your buildings to be looking like this: 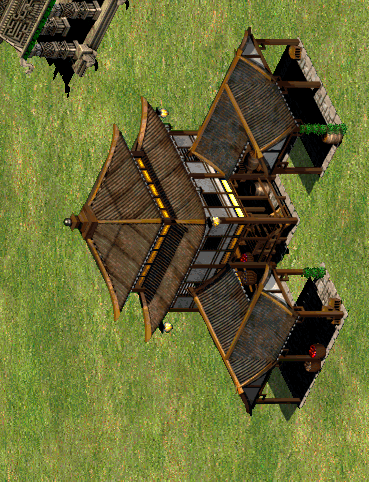 And then it would again be hiding whatever it was hiding before. So nothing was achieved.

That’s why i’m excluding sprite rotation.
What i would like would be at least a basic map rotation for the ressource and mountain, rock stuff (like what you said about a 4 angle rotation)

This would still be impossible without reworking the engine. The devs can’t be bothered to make basic features like player profiles and static game rooms (which we had on Voobly), I very much doubt they would implement this.

You can’t rotate them without involving adding new textures and animations from the missing angles, they used 3D models and then converted them to 2D for DE but i am quite sure the missing parts are just black squares so imagine all the hard work and the RAM and VRAM utilization increase adding more animations.

Your suggestion would be possible if the game would be using a 3D engine.

Considering it’s been 6 months since release, and features we previously had still haven’t been added in the “Definitive” Edition, I don’t have high hopes.

Considering it’s been 6 months since release, and features we previously had still haven’t been added in the “Definitive” Edition

6 months spent on mostly balance and bugfixes, which are more important

Balance and bugfixes are very important, and the game is improving but the Definitive Edition should include basic features from all previous versions so there is no reason for the community to be divided.

Orthogonal rotation would be so awesome!

Just so everyone is on the same page it would simply rotate (x,y) coordinates of buildings and units in correlation to the cardinal directions / center of the map.

Again - there’s no need for graphics of buildings from other directions - It wouldn’t rotate buildings - it would change their coordinates - for 1 clockwise rotation it would be:
x’ = y
y’ = -x

Since you can you should rotate units - so they remain consistent (when moving or attacking buildings).

I guess it will remain my wet dream though

the Definitive Edition should include basic features from all previous versions so there is no reason for the community to be divided.

Yeah, they will add them eventually.

I wish they add UP features to DE so some awesome UP mods can make it here.