First I am not talking about adding new a new swedish consulate, just adding some of the existing ones as options for the other civs. Historical precedent is easy since European powers were basically everywhere so its just a matter of balance and maybe the right options, also making sure that it requires less reworking ( so like german consulate’s cheaper banner armies are like off the table)

For India and China - either the Dutch or Spanish options

For Japan - Either France,Brit or Russia??

just want to get some opinion

The Dutch can work as an option for Indians, since they had a presence in India for over 200 years. And while the Spanish had rights to colonize India from the Pope, they were taken away a year later. Sweden, however, operated a factory in India for around 100 years, so they could be a totally new option for Indians.

For the Chinese they could have the Portuguese, since they had a presence in Macau for over 300 years. The only other options that would make sense would be an entirely new Japanese or American option, but those would be stretching it to the end of the 19th century,

For the Japanese the only option that would make sense would be an entirely new Chinese option, since they only traded with the Portuguese, the Dutch, China, the Ainu, Korea, and the Ryukyuan Kingdom during the game’s time frame. If one wants to be really pushing it, an American option might also work.

I would like to note the reason Spain and Dutch would be fitting for China is that both of them had presence in Taiwan before getting kicked out. This also fits the game as it is because of the presence of Iron troops, which were units that were deployed during the siege of Formosa

For Japan, the british actually had a small diplomatic connection with the English, mostly through one man but they did build factories. 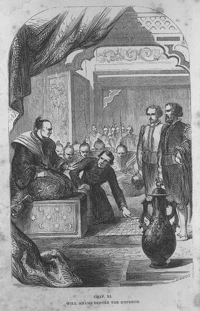 William Adams (24 September 1564 – 16 May 1620), known in Japanese as Miura Anjin (Japanese: 三浦按針, "the pilot of Miura"), was an English navigator who, in 1600, was the first Englishman to reach Japan leading a five-ship expedition for a private Dutch fleet. Of the few survivors of the only ship that reached Japan, Adams and his second mate Jan Joosten were not allowed to leave the country while Jacob Quaeckernaeck and Melchior van Santvoort were permitted to go back to the Dutch Republic to i...

French, eh mostly 19th century stuff but they were advisors and sponsors for modernising japan for the shogunate so why not

No they did not, the Treaty of Tordesillas made it impossible for them to do it, it was strictly Portuguese territory, as far as Spain and the Pope were concerned.

In fact, it already does not make sense that Japan gets a Spain Consulate option, since the Spanish never went there, the Portuguese did.
Even the Nambam Art Consulate shipment in wrongfully attributed to them, since the Nambam (Southern Barbarians) were the Portuguese, and that is the name the Japanese gave them.

Spain stuck to the New World, and only managed to colonize the Phillipines in the Iberian Union Era, which was a huge mistake.

All the East belonged to Portugal, before the Dutch, and then the British showed up.
Spain never had a significant presence there, or a Consulate.

japan and spain did have relations since spain held the phillipines and also taiwan before they got kicked out.

Japan also traded with manila mostly, which is where I think the spain connections comes from

There was also the only japanese diplomatic mission to the west before isolationism which was to Rome through spanish territories.

I was under the impression Spain was in the Japanese consulate for lack of other options.

They had relations, they just werent the most active relation that japan has. 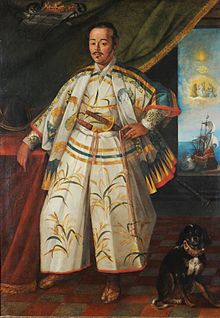 Hasekura Rokuemon Tsunenaga (支倉 六右衛門 常長, 1571–1622) was a kirishitan Japanese samurai and retainer of Date Masamune, the daimyō of Sendai. He was of Japanese imperial descent with ancestral ties to Emperor Kanmu. Other names include Philip Francis Faxicura, Felipe Francisco Faxicura, and Philippus Franciscus Faxecura Rocuyemon in period European sources. In the years 1613 through 1620, Hasekura headed the Keichō Embassy (慶長使節), a diplomatic mission to Pope Paul V. He visited New Spain and var...

The concept of the consulate is a deal with European civilization. Japan has caused its own isolation, so it’s right to have an isolation option, but it shouldn’t form another Asian alliance.

Even if you focus on getting history right, you shouldn’t forget that this is a game.

No they did not, the Treaty of Tordesillas made it impossible for them to do it, it was strictly Portuguese territory, as far as Spain and the Pope were concerned.

The Spanish were briefly given territorial rights to India by Pope Alexander VI on 25 September 1493 by the bull Dudum siquidem before these rights were removed by the Treaty of Tordesillas less than one year later.

Spain never had a significant presence there, or a Consulate.

That was… the entire point of my statement. But you only read half of it.

Maybe add revolutionary nations to the consulate as well.