For everyone asking for a Q&A, that will come prior to the launch of Age II on consoles. I will update this thread with console Q&A’s when it’s ready.

I can’t wait for this to come out on Xbox. I’ve always loved rts games online such as lotr but have long heard how this is the pinnacle.

What’s concerning me is how quiet it is about this with no videos since the major Nelson one that showed briefly the UI.

Trailer is now up and pre install on game pass

I played this game when I was a kid and I loooved it. I put countless hours in it. Now, I play the game on pc occasionly. I’ve transitioned to Xbox and I’m mainly a competitive controller player. I’ve always wanted to play this game on a controller and Its now a reality. My dream came true!

Where do I sign up to test? I think I could provide critical controller feedback for Aoe.

It seems that XGPU does not include the three dlcs?

i heard this was coming to xbox earlier today. willl be interesting to see how it turns out. i just really cant see someone being high ranked on console against kbm. personally, i used to be a 10 year xbox player. love me the controller. but even i dont stand a chance against myself now that im semi pro on kbm skills 2 years.

Cross-platform for Xbox and PC?

Will console players be able to chat with other players? I wouldn’t want to hear other player’s voices, but as a PC player I’d be fine with reading speech-to-text.

Relatedly, will an icon be displayed next to a player’s name to indicate if they’re a console player? Sometimes players want other players to communicate with them (not that they have to), but it would be helpful to know if players have the ability to do so or if there are limitations in how they can respond.

Cross-platform for Xbox and PC?

Yes, this one was confirmed in that article when the port was announced in October:

We also considered the functionality Xbox players have come to expect from their games and so the game will include optional crossplay between platforms, allowing you to play with your friends on Xbox and on PC.

The Console Age is Coming to Age of Empires - Xbox Wire

We’re ageing up and heading into the console age. Age of Empires is coming to Xbox consoles in 2023! Our team has been listening to you when you’ve been asking us to bring these globally beloved RTS titles to Xbox and we’ll be doing that next year....

Relatedly, will an icon be displayed next to a player’s name to indicate if they’re a console player?

As of now, Windows Store/Gamepass players have the Xbox logo in the scoreboard so I assume this won’t be changed for console players.

Will it be possible to hook up an Xbox controller to a PC and play AoE II DE with the new controller friendly modifications, or do we need to buy an Xbox to have access to the console version of the game?

it would seem so… A little disappointing, but considering i don’t have to pay extra in the first place, for a day 1 release no less, I’m not too bummed about it. That said, they’ve also announced an AoE4 release this year which really excites me, as I was a beta tester. However, my crappy laptop couldn’t really play it, even at the lowest settings. It would run, but BADLY. Unplayable for me at the time.

They’ve not mentioned any AoE3 xbox release, nor anything for Mythology, games I loved dearly. Maybe in the future.

Has anybody been able to find the option for scenario builder/editor on xbox series s because it seems available on steam or whatever but the menu is different and I can’t find it anywhere?

I’ve tried this game on two Xbox consoles (I have a series S in the office and an X in the game room). I also have a keyboard and mouse hooked up to thr S.

The S worked fine - ok the X, the camera immediately shoots to the top of the map and remains stuck there, on every map, scenario and setting. The game is unplayable.

Just looked and as I suspected it carried over the mouse and keyboard settings to the new console.

In the first Chola campaign, the two starting heroes have an attack value of 1 for some reason.

Can console players play CBA? If so what do I have to do to play?

I been watching Spirit Of The Law. Not even watched whole video, and I come the conclusion it’s a device downgrade from keyboard and mouse. They might even the odds a little if the console player got themselves a keyboard and mouse.

The pad support was implemented great. The added automation of tasks for villagers is just excellent. It plays much better for me than on PC. I’m delighted with this console port.

Spirit of the Law says otherwise. 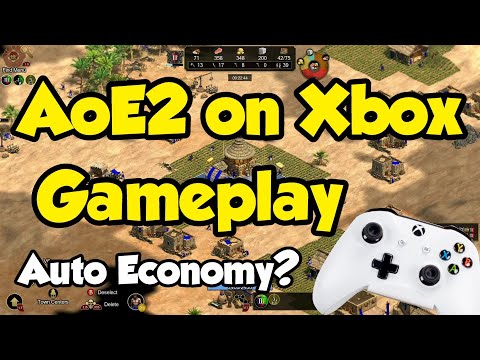 I wrote about my feelings. What do I care about some Spirit of the Law.