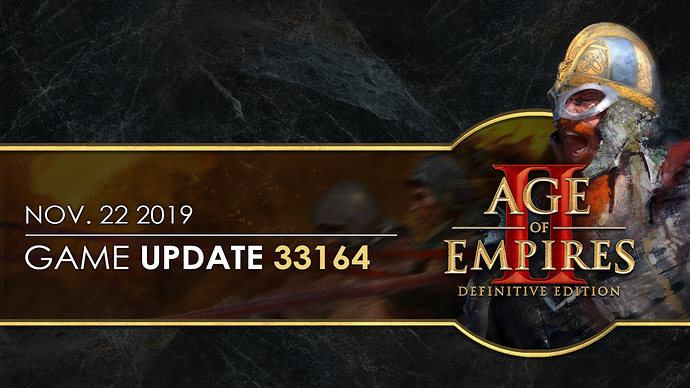 Hello adventurers! Today’s update comes with a handful of fixes before the weekend: including performance and framerate improvements aimed at enhancing your gameplay experience. Check out the notes below, then grab the latest build on both Steam and the Microsoft Store!

My ■■■■ performance is much worse for me now, not even getting 60fps fully zoomed in when before I got 60 fully zoomed out wth did the devs do

My game started booting me saying I was disconected when I wasn’t after this update, it turned things much worse for me as well.

I can run the game with UHD on 40fps finally, but the benchmark test gave me 560 with UHD.

I mean, is this a better performance update? Are you guys sure?

It’s excellent to hear that some new patches for AoE2: DE got to come out to fix some bugs. There are other things to do in the upcoming patches like some good changes to some civs and other changes as well. Here are some very good ideas:
• A new building, the Light Wall gets added and the Stone Wall becomes the upgrade of the Light Wall. The Light Wall is available in the Feudal Age while the Stone Wall gets moved to the Castle Age and the Fortified Wall moved to the Imperial Age
• The Onager no longer destroys tree but the Bombard Cannon gets that ability
• In the fourth scenario of the Saladin campaign, the player, Jerusalem is the Saracens instead of the Byzantines in order to give Jerusalem the Middle Eastern building set
• Bulgarians get their Siege Onager removed
• Burmese, Lithuanians, Magyars, and Portuguese get their Onager removed
• Burmese and Vietnamese no longer uses Elite Cannon Galleon
• Chinese gets Crop Rotation
• Block Printing enabled for Chinese and Turks while it gets disabled for the Incas and Mayans
• Franks get Keep, Bombard Tower, and Redemption
• Incas gets their Siege Ram removed but have access to Siege Onager to even out the siege weapon access of the three Native American civs
• Khmer loses Cavalry Archer and Parthian Tactics
• Malians no longer uses Cannon Galleon because their Galleon was removed
• Malay receives Hand Cannoneers
• Portuguese no longer uses Crop Rotation

My benchmark score jumps from 107x-108x to 115x, FPS finally over 30, so there seems to be improvement.
That is with 8GB RAM and UHD disabled (I haven’t been brave enough to turn on UHD yet

) and most of thing on low settings.

However scrolling around the map is still feeling quite choppy, I could see image shaking when doing that.

HP bars and mouse click-drag box appears out of position for me after this update, posted about this bug here

After updating the game to this version it’s not launching anymore. Could you please help?

I get 1000+ in my benchmark with UHD and ultra graphics, I just don’t like playing with it cause it overloads my GPU

map scrolling lag is worse yet again. 2 patches ago everything was fine.

tbf, UHD makes the game way more cooler, but it should be optimized.

So, this is the best performance I got by far

Without Spanish voices yet. Ok.