AI musketeers will always chase cavalry around in melee mode. Given that it is impossible for them to catch cavalry, they basically will just die to other attacks in the meantime. They will not attack anything else till cavalry leaves their sight.

It is therefore very easy to lure them with cavalry and then use light infantry to shoot them down as they are moving around brainlessly in hand mode after the cavalry they will never catch. See image and recording below. I show a picture of AI Maigadi chasing hussars while my longbowmen do quick work of them.

It is MUCH BETTER for them TO SHOOT AT THE CAVALRY IN THIS SITUATION, instead of dealing no damage and dying in the process.

Idk what should happen - but when cavalry is fleeing from a fight, the other soldiers must be killed before running after the horsies. 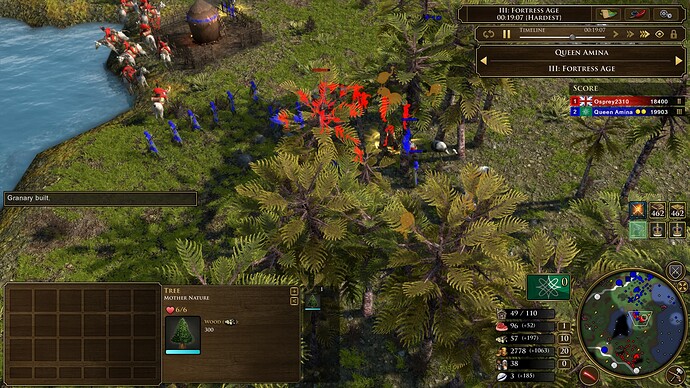 These Maigadis are running after hussars, instead of killing my longbows.

Attach a SAVE GAME (.aoe3Ysav) or GAME RECORDING (.aoe3Yrec) of the match where you encountered the issue. Link it below if using an external file service.
Here is the recording. The above fight happens around 18 minutes or so:
*
Maigadi_chase.age3Yrec (10.8 MB)

+1 from me. I like that ai uses formations and stances, but musketeers should only engage in meelee when they can actually hit the cav, if not, ranged should be the default. I’ve seen the ai micro their units much better than before, I think it just needs tuning to get there.

Thanks for reminding me about this issue @DiplexBoss6! We’re now tracking this bug

Thank you so much Mr. Ippert.

Another issue with some AI units (mostly musketeers) is that sometimes I see them use melee attacks in range. They will swing their bayonet/scimitar from far away and my units will get hit.

This also happens with Indian Brahmins and their stomp ability. The AI brahmin sometimes use stomp at range and my units will get paralyzed even though the Brahmin is nowhere close.

Thank you so much for reading my reports!

These magical long range hits are something we’re aware of yes, but it’s been hard to get to the bottom of it. Hopefully we’re successful in this soon