Following the most recent patch, the AI seems to be significantly less capable. For example, playing against the hardest AI, the AI rush is a solid minute or 2 later than previously. Digging into post-game data, it looks like the AI is sitting on large numbers of idle villages (for example, 16 in the beginning of age 2).

The AI should have virtually no idle vils 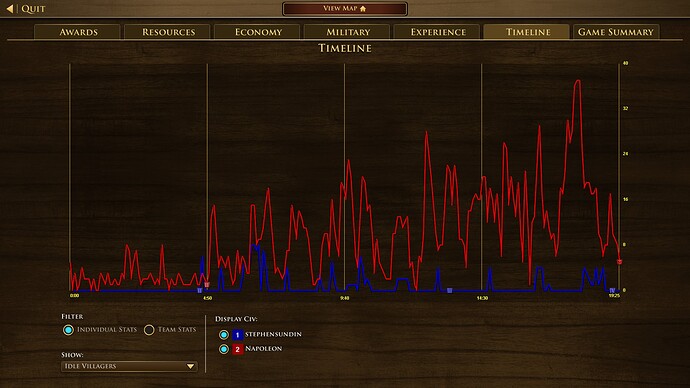 AI villagers will drastically change priorities very quickly when gathering resources. They often chop wood for 2 seconds before they decide they want to do something else and then run across the map to a coin mine near the enemy where they die.

Allied AI in particular are terrible now. It has rendered the game unplayable for me.

It’s like the allied and enemy Ai are playing on two different difficulties. Totally useless. I played one game where the Incan AI spent the first 30 minutes going from resources to resources and only building economic buildings while the two other AI weren’t fairing much better. Team games are unplayable which are the only games I play. I’ve lost every single match I’ve played because of terrible allied AI.

They’ve done that run between resources thing since DE came out last year. It’s not the patch.

This behavior is different than the frenetic switch between resources. The AI has idles the entire match

But the AI has seen a significant downgrade with this patch for sure. Before I could have a competitive 4 vs 4 game with AI players but not now. The enemy AI has improved since DE came out but the allied AI has become a major determent.

The AI surely has ben nerfed this patch. Before, they would out a fight at least, now its a piece of cake.
Not only that, but I remember the AI when DE first came out: it was better than ever, ai could revolt, they built forward bases outside of you base and kept pressure, even in the beta i think i saw it embarking and disembarking in water maps, using better tactics than what they use now.
What the ai has going for it now is thatits better at microing units, but all the rest has been tone down. We need ai revolts, ai forward bases, better management of resources and it would.be amazing if the ai could build tcs on far sides of the maps to control resources: many times i end up a hardest or extreme game only to see i have built a tc or two in particularly rich sections of the map and the ai has just stayed in its base, build a second tc near the first one and conpletely disregards rich sections (or it send villagers to those resources but with no tc or defensive buildings near they are prone to raid.
Also, let them build walls.

Agree. The AI was very strong about two patches ago. Very fun to play with and against.

I don’t know what happened but they are now prone to massing resources and opting for fast fortress more often than building a good army in Commerce age.

So they easily die to rushes sometimes. Also noticed that they are very sloppy with villagers and let villagers outside the TC even if they are being attacked. Loses several vils and then finally decides to put vills in. This happened in Multiplayer, where the AI difficulty is now broken.

In Single player, the allies do not try to protect you when you’re attacked and don’t respond to your requests. Cannot tribute (because bugged) and doesn’t come to help you when you’re being attacked. Previously used to do this tho. Now the ally straight up attacks enemies without thinking about protecting its own base at all. Outcomes vary.

I recorded a match against the AI to see what it was doing.

Overall impression. Idles aren’t just standing around. The AI is just making very poor decisions on how to allocate those vils

Issues I noticed with the AI:

Wow this is a nice recap. The ever herding AI is frustrating in teams, specially if you’re Hausa or Ethiopia, because AI spread all animals away from granaries and you’re forced to do a never ending micro.

I’ve also noticed that the natives AI move every villager in the community plaza a little every few seconds, then assign then to work again an after a few more, move them again. I haven’t seen how it affects their bonuses but it is not a graphic bug, as my own villagers didn’t behave that way.

Great summary of the main issues!
The idle vill graph is also appalling…
Hopefully something will be done to improve the AI behavior

It is concerning to me the devs haven’t commented on these AI issues either here or on steam. I’ve let them know on twitter too and nothing.

Large Numbers of Idles
(I have spikes, but I’m an idiot human lol) 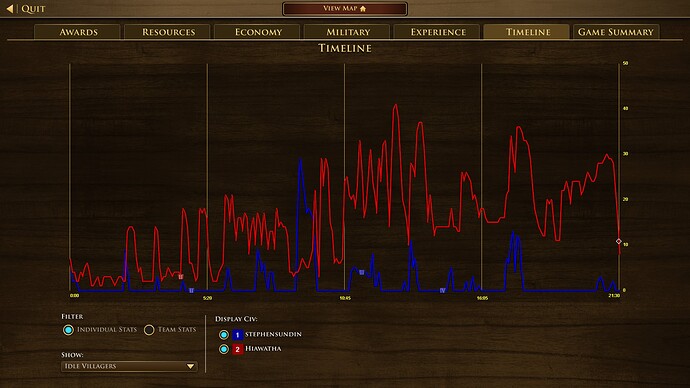 Repeated Switching Between Hunts/Killing Hunts and Not Eating 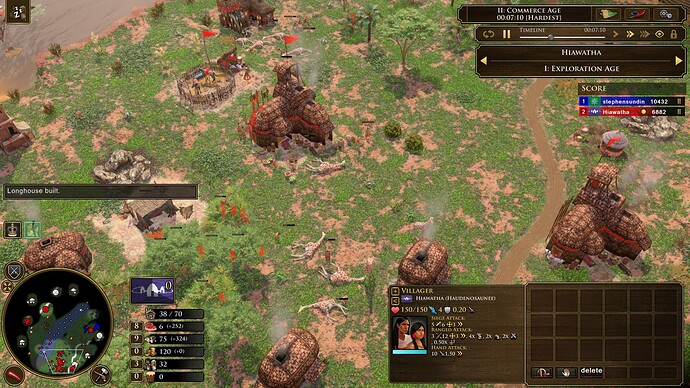 In addition, additional issues I did not note in my earlier summary:

latest Patch seems to mention some AI stuff, id assume they wanna improve the AI but that it is likely just a little early to say anything.

I tested the AI on the hotfix that came out today. The changes they made were related to fixing difficulty selection in multiplayer; it seems to have had no effect on AI behavior.

I must say, in particular, the Haud and Lakota AI are much worse than many other civs AI.

The Euros except the Germans, and the Asian civs are at least capable of giving a challenge to me. Native American AI is poor and Africa always seems to be a hit or miss.

That’s sad. Hopefully the next will address this. I play multiplayer but with some friends we play against the computer because they feel more comfortable that way, and we would really love to have a more competent ai that builds more tcs and takes map control rather than always having all the map for ourselves and end the game sieging the base they never left. Also, if there is going to be work done on the ai, please let them revolt and build walls

Hi all, thanks for taking the time to recap all the issues, this is much appreciated, we are aware of these issues and are being tracked.