When trying to subscribe to any mod in the mod center, it gets stuck on ‘downloading’ yet the mod gets a green checkmark. In my mods folder, the game creates the folder and subfolders for that said mod, but the folders are all empty. 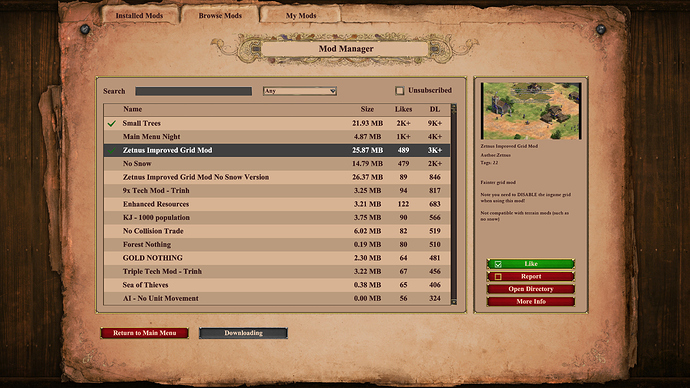 Im having the same issue. One mod is stuck in downloading, and I cannot get any other mods. Tried reinstalling the game as well, and still broken.

I’ve had an issue where only the mod with priority 1 stays while the rest are unsubscribed/removed when I restart the game.

Yeah I happens to me as well, only priority 1 mod stays after restarting the game… Anyone knows the solution?

Infact when you launch the game, all mods other than priority 1 actually get deleted from the subscribed mods folder.

Ye, having the same problem…

Having the same issue. Cannot insubscribe from current mods or install new ones by subscribing to them. (They get reset to previous state after restarting the game)

Exact same problem here - anyone has a solution to this? (steam version)

Yes and I’m on the latest build

Thanks for reporting this and confirming that it is still present in the current build.

I’m having the same issue

I have the same problem. Technically I have modes enabled, but they don’t work. Is someone looking into this?

I cant get any mod to work for me. Which is really frustrating. Tried subsribe, usubscrice. Restart game 10000 times. Logged into xbox live. Nothing works. This game isnt playable without small trees addond if ur somewhat of a experience player

For whoever is really desperate to use mods while it isn’t fixed, i think you can ask someone who managed to download the mod to copy the files in the aoe2de folder in the games folder and send it to you

Just thought I’d chime in that I have had no problems like this, and I’ve been playing since launch. I wonder what we are doing differently.

Sounds like a permissions, or a security software issue.
Have you tried to:
Install or verify the game is installed on your C: drive
Delete the mods folder C:\Users\username\Games\Age of Empires 2 DE\%64bit-steamID%\mods

Did you happen to buy the game on both steam and xbox live?

Could this be cause by specific mods?

Can anyone else verify this?

Yes. It’s still an issue now even with the new update. It’s installed in the C: drive and i only bought it on steam. I’m going to try deleting the mods folder and see if it helps.