An idea to favor the attacker

if I had wanted another tc not to be done, I would propose raising its cost or if I had wanted the games to last 10 minutes I would propose tripling the damage of the tc, but I haven’t done it, at least you saw that the 3 tc and in Abbasid 4tc is not a fact irrecurrent, Marinelord was French against Abbais, if going for another tc is so risky maybe we would have seen Marinelord with 2 tc and being aggressive but he preferred to do 3tc and not be at a disadvantage of villagers, the truth is I think that as I described the proposal if he reads it to details it is not such a drastic change in the meta and it is only an idea, greetings

Then I simply don’t get why you want people to stop doing as much TCs, if the game duration or the game action is not the problem. It’s like limit the number of barracks or archery ranges to 2, it makes non sense…

I would say that the pros “play in another league”, meaning that they do whatever they consider better for the situation. Maybe MarineLord considered that a third TC was necessary because he lost the initial rush against the Abba player, or maybe he just started the game thinking “I want to boom”.

As I said, boom, turtle or rush are right now balanced ways of play the game, and personally, I won more matches being aggressive that just being defensive. Once you run out of resources under your map control being defensive it’s near gg, no matter how many TCs you have.

if I had wanted another tc not to be done, I would propose raising its cost …, but I haven’t done it,

That’s not my intention

In SC2 there is aggression from minute 3 (sometimes before) and you can make a cheese to 1 base or an all in to 2 bases.

In the pro scene, if I haven’t seen a fast 2nd TC, I’ve seen a 2nd TC before 7-8 minutes with a couple of aggressive units (that’s not a rush or anything).

I also read around (and they are probably right) that the keep is very powerful for its cost.

In team games it is much worse, but that is another matter.

The problem with AoE4 imo is that TC’s benefit both boom and turtle playstyle as you can produce villagers, garrison villagers inside it and shoot arrows. Projectiles make it even worse as the attacker can’t make a difference when investing a ton of APM as he can’t dodge arrows.

If you boom in SC2 your taking risks. Additional minerals usually are situated between both main bases, TC’s require upgrades to provide protection, workers are taking way more damage from units than villagers on AoE4 and the game pace is much faster giving the attacker an advantage. Further when you turtle in SC2 it means that your out of ressources or at a considerable disadvantage quite fast since there’s a limited amount of workers for mineral and gas spots and those ressources fade out quite fast. On AoE4 you can put idk how many villagers on one single gold mine, one wood spot and depending on the civ your more or less not forced to leave the base for it (if necessary one can build a TC on berry bushes). Even without gold it’s far away from being game over as mass feudal units are quite effective. So within the first 10 minutes of the game I really do not see the downsides of going for a turtle.

While I do not want AoE4 to become like SC2 I think the game just lacks strategic options due to the reasons/game design mentioned above and I’ve been wondering why 2 TC wasn’t the standard already month’s ago.

Next to the proposals that have been mentioned the devs could as well just reduce the amount of villagers that can be garrisoned inside TC’s again. Like 10 inside main TC, and 5-7 for any additional TC or just again decrease the overall DPS from garrisoned units. That should pretty much solve the issue of boom-turtle-rush imbalance.

I understand your point, but as you said don’t want this game to become AoE2 or SC2.

I would like the feudal age to last more, it’s when I (and most of people I played with) get more fun. And stone walls move to castle age.

Sincerely I don’t think what you or Hassan are saying will be corrected punishing the making of TC’s.

I’ll settle for a buff to the battering ram and that it also has a buff when putting units inside.

Yeah they could make that part like AoE2. Mostly though I want them to make it easier to ungarrison rams on the spot.

Maybe it’s time to remove the siege engineering requirement, the initial hp of the siege is 300 and the technology reduces it to 240 hp (this, to not benefit civilizations with cavalry and heavy infantry)

Without a doubt, the R key is to immediately ungarrison the unit from the Ottoman siege, it should be applied to the battering ram.

The ram must have more HP and be buffed by the units inside it.

Technology can be upgraded cheaper, but I would not remove it.

I opt for that

remove the siege engineering requirement, the initial hp of the siege is 300 and the technology reduces it to 240 hp (this, to not benefit civilizations with cavalry and heavy infantry)

minute of the video [Should tower rushing be removed from AOE4?] Refining the idea of Beastyqt and in a way that it doesn’t alter the Mongols play style and in a way that it doesn’t weaken the tower which is a defensive resource Proposal The ram will be played the way the Abbasid civilization does, but except for the Abbasid civilization, the battering ram will be available in the Feudal age. The ram will initially have less health and the siege engineering tech will return the ra…

you copy paste this thing and it doesnt even make sense

i think these are great

wrt to rams, i think they’re too fragile, i dont think we necessarily need to see more of them, just make them more pop efficient (which means they scale better later in the game where they already fall off)

reducing garrison cap on TCs also hurts the later stage more, and buffs cav more, so i would also avoid that

I’ve been wondering why 2 TC wasn’t the standard already month’s ago.

The game is quite new, it is not solved yet. I’m sure people will be finding more and better builds.

I would say that making a second TC is risky if the other one is trying to rush you all or nothing, but a third TC… No way.

look at the training, see if he argues the same thing again

Yea as expected. He pretty much always goes for a second or even third TC while clearly having the APM to play very aggressive harassing the opponent from multiple sides or in other words go for a rush. There’s lots of things I love about AoE4 but when I played the game for the first time during the stresstest a year ago I immediately thought that the combination of powerful defensive structures + projectiles would sooner or later lead to a very dull gaming experience.

Muslim did 3tc in PUP 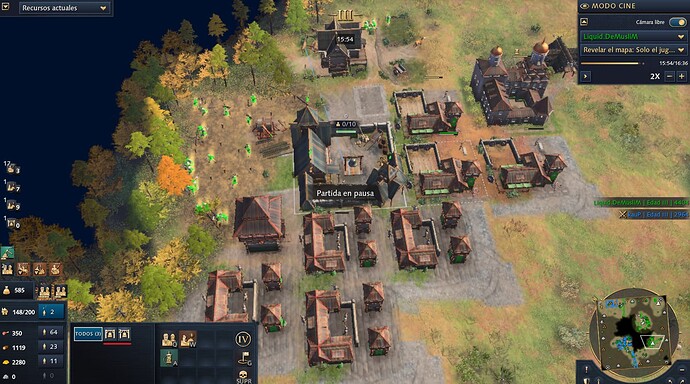 Muslim did 3tc in PUP

And? What does it means?

I would say that making a second TC is risky if the other one is trying to rush you all or nothing, but a third TC… No way.

look at the training, see if he argues the same thing again
Twitch

I am always lost if your argument is everytime about pro scenary or the game in general.

I would not take the pro scenary to measure things like this, while these people can have 3TC boom, military, and a milimetrical economy, this is not something the 95% of the player base can do.

Also don’t forget that sending units to enemy base to harass is not a rush, a rush is an all or nothing where you put every resource to kill your enemy at the very beginning.

I encourage you to try putting 3TC and got a rush from someone. While you are spending 1400 resources and the payoff will start about 3-4 minutes later of each TC, 14 horsemen can just burn your TCs and kill your villagers.