Analyses of the ratings - Spotting the issues

Can some of the devs tells us more about the rating system? That would be great. I know Voobly just has it one elo calculator. For every 1v1 to 4v4 you can plug in the elo of ever player and it just shows the outcome. So the calculation is transparent. Can we also have such thing for DE? Now we kinda have to guess how the system works. 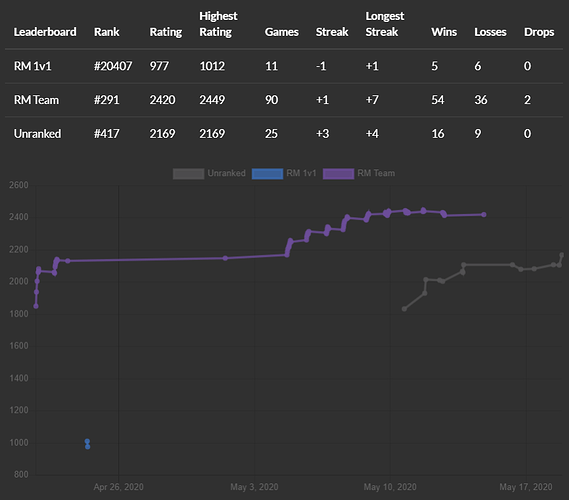 I really cant believe such profile. Below average in 1v1, but #291 for team games. This guy even joins noob lobbies if he playes unranked games. 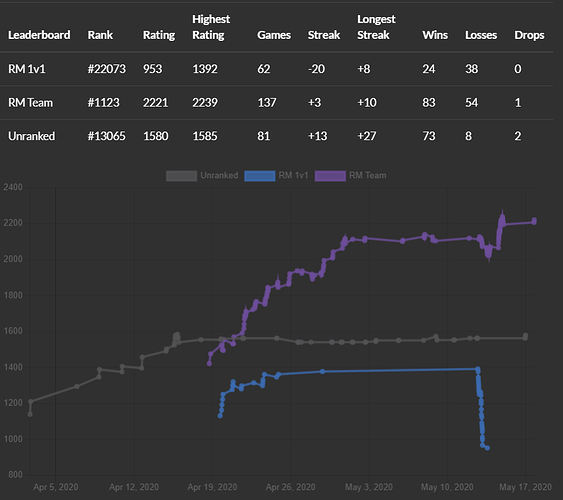 Another player. I like his current streak for 1v1. Seems pretty bad.

I have had a closer look to these profiles. Both players are probably carried by allies (friends). They cant even join a game if it is without his friends.

What do i need to do to get a responds from a dev?

If they wanna save team games they need to react quickly. Team game rating seems really broken to me. It is for me the reason to not play team games.

Since May 10 the average for team games is increase from around 1275 tot 1315. Rating inflation is still a thing and not really a result of bad match up in the first patches.

Current #1 for team games is also 2.8k and i see many players in the top get still many points for winning. I really think we we will 3.0k before the summers ends.

Given that there is an connection in the ratings between 1v1 and team games at the start, this mean also some 1v1 will really be messed up. So this is not only a team game issue, but has also some impact on 1v1.

I would challenge someone like Viper and Daut start an adventure with a second account. Play only teamgaemes and win almost everything until they became 2.8k team rating. Then both start playing 1v1 for the first time on that account. I wont be surprised if one of those accounts will hit 3k for 1v1.

This shows how broken the current ladder is.

What do i need to do to get a responds from a dev?

What harm does this cause?

What harm does this cause?

The source is unknown and dev still dont react. I hope they will find the issue.

I’ve heard that you are gaining or losing points based only on the highest player on the other team, and it seems to make sense given the results I’ve seen (beating 2x2.4k+2x1.2k as a 1.7k player in a 4v4 gains you a ton of points). Thus you’re gaining the max and lose the minimum. Would be nice if they made it based on the average, but yeah, I don’t see any real harm this is causing.

I don’t know the exact numbers. But when I win team games I get like plus 15-20 points and when I lose is minus 10-15… So obviously the ELO will get inflated even with a 45-50% winrate. Something is wrong!

hey, thats a great thread i am seeing just now.
I made a similiar thread, but I know what the issue is.
check herE: TG-Matchmaking - we get unbalanced game bc elo calculation is wrong

its basically a terrible calculation that values the indivduals elo over the average elo when rewarding points. the good news is, that its an EASY FIX if someone reads this.

my assumption of the formula is sth like this:

I mind have an idea why ratings are inflated.

At Voobly (and probably HD too) it seems like a team game is considers as 1v1 to find the total amount of Elo win/lost by the teams. That number seems to be distributed around all players.

At DE everyone seems to be compared to the average elo of the enemy. This will result in larger deltas for all players in the first place.

Lets look at some examples:

There is a problem with imbalanced teams (not everyone having the same Elo).

The difference in this example is just 1 elo, but it is already an inflation of 0,25 per game for each player. Thinks can be even more extreme.

So the issue is that total elo win isnt equal to total elo lost. This makes rating inflated and needs to be fixed.

I have to say: I do like this feature. It makes sure starting players will get there true rating more quickly. But this only works if the ladder is not inflating or deflating. Since the ladder is inflating, it works like a multiplyer on the inflation as well.

We kind of found the two main reasons for the inflated ladder:

Why dont we just use the calculation at Voobly and HD as base? It will fix issue #1. That will be the main reason why there is inflation.
You can still add some multiplyer for new players so they will move up or down more quickly. That is not really an issue when the inflation of #1 is fixed.

If they change the way how the calculations work, then i think it is a good idea to recalculate the rating of every players again. I know there are APIs where you can get the full history of a player. That makes me conclude the devs will have such list too. They just need to re evalute the elo of all players from all games.

This is posted at the upcoming AoE update. To makes thinks clear: This about AoE, not AoE II.
I am not really into AoE, but it seems like AoE had also some issues. The devs even decided to reset the ladder.

I hope they will fix the AoE II Team game ladder also at some moment. I dont know if the devs will also reset the current rankings on AoE II after they fix everything.

I also found the following picture about the team game ratings. 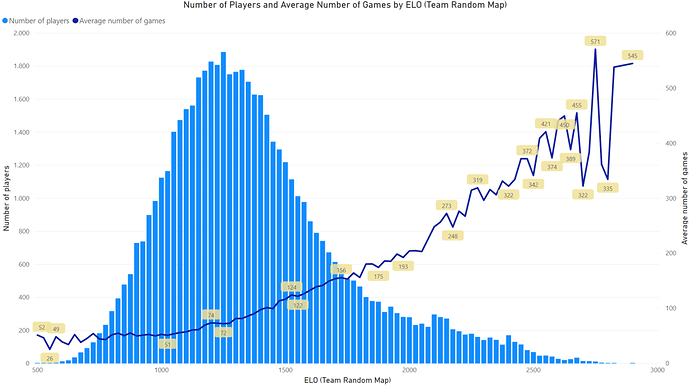 2 months age i started this threads. Until today still no response from the devs.

RM Teamgames: 50% percentile: 1350. The average rating is already inflated by 35%.
Note that: At May 10, when i started this thread, it was just 1275. So the ratings are inflated by 6% in just over 2 months! Given the current inflation we will hit 1600 as average team games rating! This is really bad design of the team game rating and something needs to be done to make the team game ratings reiable again!

I see they added death match support.
50% percentile for 1v1 DM is about 1050. This is also probably due to not many players playing death maps. Seems like not that much inflation to the 1v1 ladder, which is the same for 1v1 RM. So also no issues with the 1v1 DM ladder.

With DM Team games we see the same as RM Team games. The ladder is really inflated. The 50% percentile is already about 1425. This means an inflation of 42,5% in yust 9 months since release. This is almost the same result als the team game rating for RM.

This shows us that there is an issue with BOTH team game ladders. They are hugely inflated and the devs needs to fix the underlying issues so ranked team games (RM and DM) will get a better experience.

I dont know why, because i didn’t read anyrhing about a change of elo, but it seems like that devs messes up 1v1 elo. I heard stories where winning player looses elo in some cases and loosing player gets elo.

If the devs have a look at that i hope they also look at this issue.

The system is designed to take into account the difference in ELO points but in a team game if you do that you are doomed. How does affect to the winning percentage the existence of a much rated player ? The ELO variance inside the team ? Top rated ? Lowest rated ? Number of players with higher rating in one team ? Premade teams vs non premade ? yada yada yada etc. etc. the list could go on and on.

On top of that then there is the point you are complaining about here which is how you distribute the points after a win/lose game.

I know that elo is designed for 1v1 and needs to be adopted to team games. Currently there are multiple alternatives that are suitable for team games. I hope that the devs had a look at this when they decides on this elo calculation. So i hope those things will never be an issue. Still you have the difference between premades and solos. Given the same skill level, the premade team will mostly win by superior communication. In the end i think team elo is less reiable then 1v1 elo, but still good enough to use, if there are no issues in the calculation, like i already point out.

I still hope from a respons of the devs on this subject. Still waiting from May 10 till now…

The median of the TG RM rating is already inflated by an addition 10 points since 12 days ago. For TG DM it looks like even an addition 15 points. I really hope the devs will correct this issues pretty soon.

I would love to see a response from the devs. This issue together with the lag/desyncs is killing TGs.