After completing the initial sign into Xbox Live challenge, the next challenge is for unlocking the good ol’ Photon Man cheat code. The issue I am having is that I have Age of Empires DE through the Windows Store (and have completed the 21st Century achievement), and Age of Empires 2 DE through Steam.
The Challenge states I need to complete the achievement on Steam to progress, is there no way the achievement through my Xbox Live profile will count towards this?

Anyone else have an issue similar to this?

I am having the same issue. If we have to purchase it again for Steam that would seem pretty cash grabby…

I am in the exact same situation as you. AOE DE on Windows store, and AOEII DE on Steam.

It is said in the event FAQ that u have to have both games on one platform.

Next event will have challenge to donate money to Microsoft.

I have it on DE2 Steam and DE on Microsoft store. I cant get either app to recognize the game it doesnt have. Insanity

Well that sucks… what is the point then of signing into Xbox Live?

I have the same issue. Please fix

I have both on Windows Store and 21 century is not recognized.

Same issue here, really gotta love that Microsoft forces you to use their store and then you even get punished for it … well done.

What do you have to do to unlock that?

It’s an achievement for AOE (1) definitive edition— you must own that game and train a particular unit. It confused me too — I searched the internet assuming it would be doable in AOE 2. It took me a while to figure out I needed to launch and do it in the first game.

The cheat unit? You have to load AOE1 DE and train a photon man?

ah well I got AOE:DE out of the Microsoft Store on this PC with another X-Box account. I do not see a way to link the AOE:DE to the Steam Account.

Bummer … ! For the record you build an academy and train Centurion.

Could it be possible that you can’t unlock it in XBOXStore Version if the achievement was already unlocked? 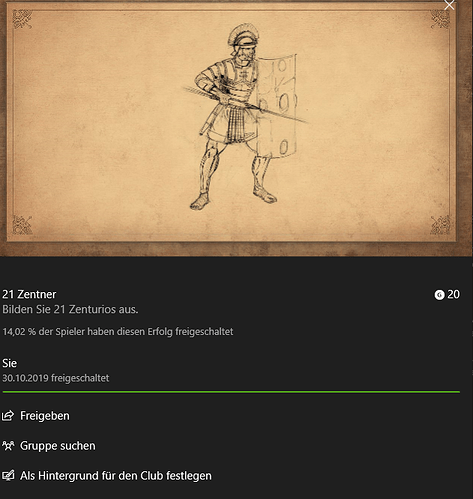 Microsoft instructions are clear: You must complete the challenge in AoE: DE under the SAME XBox account that you use with AoE II: DE. If you are a Steam user, just log in with XBox Live, get the thing done, then go back to Steam. I believe this is doable. I think. I am an XBox Live user, not a Steam user so I wouldn’t know for sure.

Same issue here, I bought my AoE:DE from the windows store back then and I have unlocked the achievment but it doesn’t unlock in AoE II:DE which I got in Steam, even tough I use the same Xbox:Live Accounts

Hi there,
I have the Age of Empires definitive edition from Windows store and Age2DE from Steam.
I have completed the 21st century achievement in Age I DE but in Age2DE the achievement is still locked.
The windows gamer tag is the same in both games.
Is this a bug or only if both games are on Steam can be unlocked?

I thought AOE2:DE was great. Until…
This whole achievement mess is a complete clustered fail. Cant add a game from Microsoft store to steam without major hoops it seems. Ridiculous how this whole Steam and Xbox cross over was not properly thought out. I cant get the achievement 21st century because they wont link.