Anyone else dislike immersion breaking mods?

Maybe I am a grumpy old man, but even I can tolerate the existence of seeing a Western Europe swordsmen unit belonging to the Japanese such as a Champion (looks like a Western soldier) but seeing polar bears with penguins on top of them is too much. It completely shatters all immersion.

I tuned into t90 video only to see a guy with polar bears. It completely shattered my immersion.

Open the main menu, see penguins, virtually everyone in medieval society had no idea of their existence. Since travelling was immensely difficult in the medieval ages. Travelling to this South Arctic would have everyone killed. The crew would probably mutiny to save their lives.

You couldn’t just fly from one place to the other on a plane. There was a good chance you would die of sickness on the long voyage on a boat. Meanwhile the pirates and other nasties will try kill you on the way.

I’d like there to be a ‘I don’t really care’ option. If you don’t like them, don’t use them. Personally, I don’t like using them because I’m simply used to the current models and can end up with legibility issues if one of the models get changed. I had the same with the Centurion model for Champions, so it’s not about ‘immersion breaking’.

Otherwise, I see them as somewhat funny. I kinda wish they’d have a model for all units of a specific line, as what really kills the immersion is if Knights are replaced with penguins riding polar bears, but the moment you upgrade them to Cavalier you get the standard Cavalier again.

what a biased poll.

completely irrelevant but kinda interesting: northern europeans were familiar with a flightless bird pretty similar to penguins: the great auk (interestingly the species whose latin name is ‘pinguinus’) 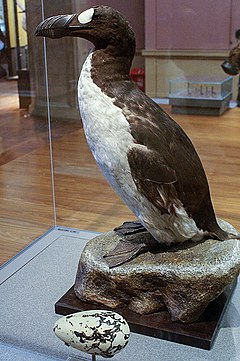 The great auk (Pinguinus impennis) is a species of flightless alcid that became extinct in the mid-19th century. It was the only modern species in the genus Pinguinus. It is not closely related to the birds now known as penguins, which were discovered later by Europeans and so named by sailors because of their physical resemblance to the great auk. It bred on rocky, remote islands with easy access to the ocean and a plentiful food supply, a rarity in nature that provided only a few breedin...

Even if they knew of them they could not be used as military units. They are not horses. And if you tried to present these to the King as a potential military unit I don’t think he be very impressed.

I personally don’t bother these «funny» skins. What I dislike is the time and work involved in make them that could be spent in more regional skins, or manned siege.
There are several aesthetic assests to improve the immersion that could be added before these funny things.

Some silly mods like the villagers with boxing gloves are fine but I wasn’t a fan of the battle elephants with spikes.

Haven’t enabled most of the mods anyway but it all comes to personal tastes.

I would understand your complaint if it was not optional and impossible to turn off. Also it’s not like aoe2 is a very historically accurate game anyway.

Yeah, the poll could use more neutral wording, and a neutral option.

That said, I’m more on the side of considering these mods “immersion breaking,” although that’s not how I’d ideally characterize my perception. More just that they feel goofy and out of place, which is a kindred concept - they either represent a questionable use of time/money developing silly graphics, or the good ones (Dark Knight, Xolotl-at-Arms) are wasted on being transient, jarring replacements for existing units, rather than becoming Editor units, which would give them a lot more utility and permanence. As it is, even the good mods are just mods; most don’t have the quality and none have the permanence to rise to the level of being “new content.”

Which comes around to how I’ve always thought it strange that the devs focus so much on modding their own game - I’ve always thought modding should largely remain the domain of dedicated amateurs, and that devs should focus on their areas of exclusivity - balance, bug fixes, and new content. Of course it’s worth taking the community’s wishes into account, and for those who really like this sort of stuff to be accommodated to some degree. But the Medieval penguin-fans out there could likely enough be accommodated by amateur modders. At least I’d like to see the devs make the silly visuals and inane “challenges” fewer and far between.

just de-acti-vate mods you dont like in the mod section.

It really breaks my immersion to see a penguin, from the southern hemisphere, riding around on the back of a polar bear, from the Arctic… It should either be a guillemot on a polar bear, or a Humboldt penguin on a spectacled bear!

Seriously, though, they should add the polar bear (minus penguin rider) as a Gaia unit. The graphics are essentially already made, after all.

I do. Just frustrating to see when an update happens. Some of these mods automatically activate.

I do. Just frustrating to see when an update happens. Some of these mods automatically activate.

Not to mention, if you do end up completing a challenge, it gives you an option to Subscribe to the mod… which you can not do and not get the mod at all!

I have seen some bizarre moments where random older event mods activate for no reason (no event taking place) though, so perhaps that’s what they mean? But it’s not even due to updates or anything. Just randomly, on a random day, I got the AoE1 Scout mod activating.