Are recent balance changes too huge?

Balance change to unit/hero stats in other games are usually less than 10%, but in this game it is usually a >50% huge change, which can make a unit/a build from OP to unplayable in a day. Take August patch for example, crabat attack, meteor hammer attack against cannons, sand warrior pop … They all get a >50% huge nerf, which does not sound nice in a competitive game.

Giving a civilization so many changes in a patch is not ideal either. It is obvious that China/Lakota is strong nowadays (this is also because you buffed them too much in a single patch), but nerfing EVERYTHING in August is bad. You can do some slight changes here, and if it is not enough, further moderations are OK in future.

And it is fun that French get nerfed again: stealth change make the native scout useless nowadays. French used to set a stealth scout in front of enemy base to see his unit combo, but it now get easily killed by units. Envoy, war dog, eagle scout, discipline… can be retrained, but native scout do not: it is unfair for French players.

And here are some of my advises based on the current August change:

Lakota:
10% teepee aura: OK
10% food income from Great Hunter: OK
Move tashunke to industrial: I do not understand this at all
Seven fire council: it is ridiculous that it is not nerfed immediately. Change its name into Five fire concil, and nerf it into 5-5-5 instead of 7-7-7.
Mortar: 3 mortar is good. 750 coin is too much.
It is proper to make tashunke aura buff from exponential to linear (just like state militia). Linear buff aura is always dangerous (mercenary, teepee etc.): they become too scary when clustered, but a single tashunke is a joke.

China:
Nerf of goat: OK, but the base herd efficiency is too slow imo. 50% punishment is enough.
Meteor damage: It is better to switch their base damage to 31-32, instead of nerfing their bonus to cannons. In this way they need 4 hits to kill a cannon, which is proper.
Tea export: remove the instant 100 export income, and give a 0.5/s export income. African civs has builds to rely much on influence, but Asian civs can only get very tiny export income.
Blockhouse: keep training Mongol army, but cannons are not necessary.

Haud:
Mantlets and rams get buffed, but there are still no reason to use them instead of light cannons in industrial.
It is better to move the resist buff shipment to fortress (and remove the auto-upgrade) to let players use them in fortress age. And buff the 5 mantlets into 6, 4 rams into 5.

French:
Revert the setting to auto-reveal stealth units. I do not get the point here.
Enable french to train native scouts from explorer/TC with a limit of 5/10. And you can train infinite native scouts after you have a native TP (as usual).

African:
Sand warrior pop: OK, but sand archer animation time is too long.
Air berber: keep in age ii, but give it a limit of 5.
Loyal warrior: 20% decrease to outlaw/native, 15% to mercenary.
Hero should have auto-upgrade in industrial and imperial.

Others:
Cover mode of heroes is annoying indeed. But if we decide to remove that, it should not have so much XP to kill a warrior/monk anymore. You get 45 XP to kill european explorer, and 100 to kill a native warchief: but it is not twice difficult to kill a warchief now.
European dragoon is way too expensive. 90 food 80 coin is proper.
Crabat attack should not be less than 35. 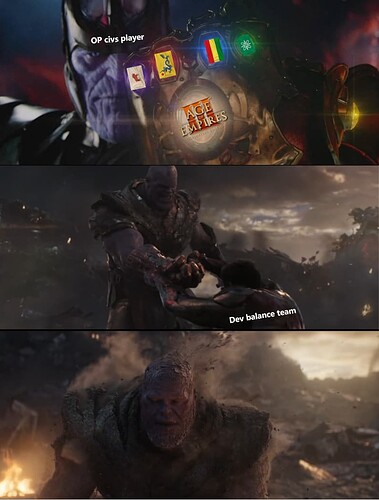 And it is fun that French get nerfed again: stealth change make the native scout useless nowadays. French used to set a stealth scout in front of enemy base to see his unit combo, but it now get easily killed by units. Envoy, war dog, eagle scout, discipline… can be retrained, but native scout do not: it is unfair for French players.

Imagine that 2 of your units can go stealth to counter enemy units that other way you cant kill. Also imagine wasting a shipment to enable stealth. Thanks God that doesnt exist

Seven fire council: it is ridiculous that it is not nerfed immediately. Change its name into Five fire concil, and nerf it into 5-5-5 instead of 7-7-7.

It needs to be nerfed but it absolutely needs to remain quantities of 7 since that’s the historical reference. 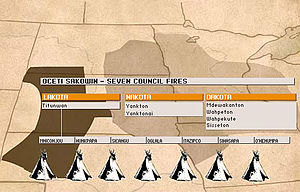 The Great Sioux Nation is the traditional political structure of the Sioux in North America. The peoples who speak the Sioux language are considered to be members of the Oceti Sakowin (Očhéthi Šakówiŋ, pronounced [oˈtʃʰetʰi ʃaˈkowĩ]) or Seven Council Fires. The seven-member communities are sometimes grouped into three regional/dialect sub-groups (Lakota, Western Dakota, and Eastern Dakota), but these mid-level identities are not politically institutionalized. The seven communities are all individ...

Giving the card a cost would be a good enough nerf.

Revert the setting to auto-reveal stealth units. I do not get the point here.

There was too much janky bs with stealth units so this is a very good change. People would even use them as invincible walls in some scenarios.

They could maybe cut back the reveal range to 1 or 1.5 to make it a little easier to stay hidden, but stealth units should absolutely be revealed if you physically run into them.

They are niche enough, that change makes no sense. You can reveal them with explorers, pets, defenses, TC… the hard point is to keep them invisible.

How coyotes and JPK are suppoused to work then??

It makes stealth something to be used for ambushes and not total bs. Right now the more mobile stealth units can run away just out of range and go back into stealth to attack with much better positioning or raid unopposed. You can know exactly where they are and have an army to defend but not be able to do anything until your explorer walks across the map to get there. Lots of civs can’t get spies or pets and defenses have to be constructed in advanced. Some stealth units like Tashunke Prowlers are also siege units that can easily demolish any building that can reveal them.

In the case of JPKs they probably need a buff in other areas to compensate for reducing their stealth effectiveness. The card that gives stealth to Coyote Runners should also grant another bonus to make it more appealing. Most of the other units don’t need any compensation.

of the other units don’t need any compensation.

Well, you talked about 95% of them LOL. Tashunke have been nerfed while coyotes are fáaaaaaaar from OP. Giving the stealth card more buffs is not a good idea as its useless on treaty, aztecs dont have card slots for that.

There are lots more like Scouts, Spies, Forest Prowlers, Incan units and buildings, etc. The silent strike card could be made to buff both JPK and Coyotes and then it might be good enough to displace another card.