Are there any good and specific introduction to how to make campaign layouts with JSON files?

Hi. I’m new here for better information for how to make my custom campaigns with its layout and intro/outro sequences.

I learned how to make AIs for my custom campaigns via looking into other AI files on Kings an Conquerors. So, I decided to do the same way with JSON files for better campaigns for DE.

Oh, my god! It was out of my ability!

I subscribed some custom campaigns like The Golden Horde, Vytautas the Great EN. I opened their JSON files and analyzed how they are formed. I roughly understood their formation itself. Also, I understood how to change their story messages and adjust their fade and duration time. I also got how to designate an icon for each scenario.

Here’s an example with Vytautas the Great. 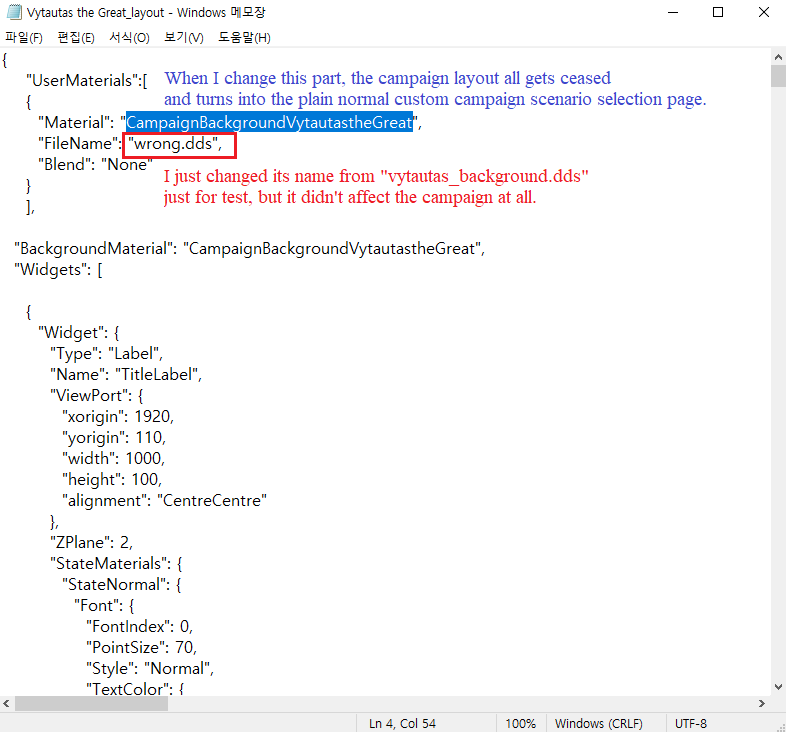 Isn’t the blue part just up to my free customizing? I thought so, but it wasn’t. Rather, the red part that designates its background image file made me curious of why that exists. As you see, I changed it “wrong.dds” without any file that is named “wrong.dds”, but that worked as original. I think the blue part has something set. But I couldn’t find any file that is named as “CampaignBackgroundVytautastheGreat”.

How can I make my own JSON files that let me make my own custom campaign? Looking into those files really didn’t help me a lot because of such confusing and mysterious things. Are there things that I must memorize? Should I be aware of computer coding languages?

There’re already many custom campaign developers, but no one yet has introduced how to make JSON files properly with specific explanation for AOE2DE.

Are there any good introductions for JSON noobs? Thanks.

↑ ↑ ↑
Here you are, this is a very thorough guide of json for AOE2:DE, though it is in Chinese.

You can look through it with the help of software which has Screenshot translating function.

(Well, I sincerely hope that someone could translate this guide into English or other language.

Please read this website and the pdf downloaded carefully because it can help you do perfectly in json making!

Thank you. But, well, I have no idea how to use that site though. I tried auto translating, but I couldn’t find any link or document that includes explanation. Some seem to require me login.

And, yes. I also hope someone translate it into English. I don’t speak and read Chinese and I personally don’t that trust auto translation as it often rather confuses me.

I couldn’t find any information from the website… There was a file that looks like a document (PDF) for JSON 1.5, but it required me to login, and it wasn’t something instant. It seemed, Maybe, that I have to register my account there. Hmm…

Please leave your email to me and I’ll send you the pdf document.

Here: mginu@naver.com I assume that’d be in Chinese. I’ll try it with a translator though.

I have sent it to you,thanks for your spread and translation!

I received it. Thank you so much!

In fact, translation is not something I want to do to spread the information but just for me to understand how to make my own JSON files.

I’m not a Chinese speaker and also translators only partly make me understand what is written, so there must be limit to me if I try translating this into English or Korean. Haha.

By the way, you said Chinese have researched about this the most. This is exactly what I thought before! I always have thought that Chinese are so good at learning something complicated nobody tells by themselves in any way, and I assumed that’s why a Chinese successfully made his own campaign Vytautas the Great. As a South Korean, another East Asian like Chinese, even I get impressed how Chinese learn something only by themselves so well and even later make their own versions. I think this is the biggest potentiality Chinese have.

Thank you for your compliment.Hope you can make a perfect jsons like ours.