Sorry to bother you with this. But I’ve been seeing this issue since the Update Preview and I thought it was probably a one-off incident but now it is happening all the time.

At least ONE AI player will go full Age 2 aggression in team games and never advance beyond Commerce Age. They focus on large armies of commerce age units, and continuously make commerce age armies at the cost of aging up. They will make villagers and have an economy (upto 45 vils) but never save any money to age.

They will never be able to compete with opponents in Fortress/Industrial in the long run. This can happen to allies or enemies and I’ve noticed it happen to Spain, India, Germany, Lakota in my games so far.

It becomes a vicious cycle where towards late game, they keep losing units and retraining, losing and retraining, and hence never have the resources to age up and make better troops.

Happens in almost all team games with AI that I’ve played in the PUP and in this latest build.

AI players should age up to keep up with opponents. 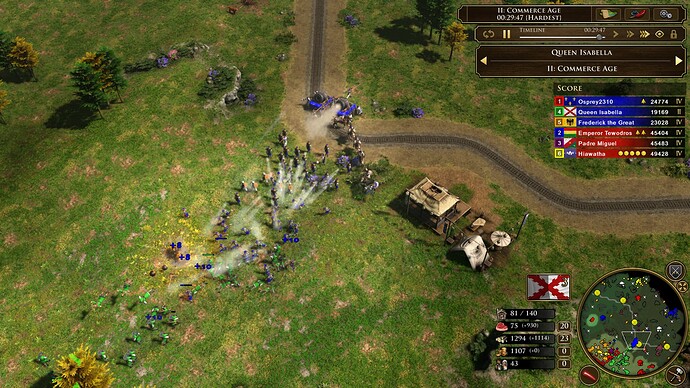 Screenshot (195)1920×1080 380 KB
Queen Isabella here is in Commerce Age, everybody else Industrial, and she is losing all battles. And also capped herself at 43 villagers - so it isn’t like the AI got raided hard and fell behind.

Hello @DiplexBoss6, Thank you for taking the time to report this to us!
We are already tracking this issue.

Just wanted to add that the real issue sometimes is that the AI can run out of natural coin if it overcommits to Commerce Age aggression but it cannot build estates in Age 2 so essentially it runs out of coin and cannot keep up.

Really appreciate your AI reports. You explain things better than I could.

I feel like you have had a lot to do with the AI improvements and as a single player myself all I have to say is thank you for your reports, from player to player.

Hey, thanks for your kind words.

I basically play against AI too, alone or sometimes with friends. And I look at AI replays lol.

I try my best to report what I can.

While I’m glad the devs are aware of this I’m a little discouraged this wasn’t included in the hotfixes as it is really hindering my enjoyment of the game. Maybe I’ll take a break until the next patch is released.

You mean some AI not advancing?

I think it may require more than a hotfix for this one. But they know about it, so I have hope.

Yeah. And I have hope it’ll be fixed soon enough as well. We might get a pup late next week.

On another note some of the African maps are not really suitable for 4vs4 because the TC are so clumped together you really have no place to build your base without allied building encroaching on it.

Hi @gmenyhart, I have a suggestion for this issue after the update yesterday regarding team games:

The patch notes do mention that “AI will not attack when focusing on aging up”, but sometimes it doesn’t want to age up at all and tries to do all-in rushes. Meaning that the AI will keep making armies and sending troops towards its enemy. This is good in 1v1 games, but can be very bad in team games. In team games, staying alive and helping the ally is more important than attacking alone. If my AI teammate loses its armies while rushing and gets stuck in commerce age because it needs to make more army, it’s pretty much game over, and not that fun.

Maybe the AI in team games shouldn’t attack in commerce age beyond say 15 minutes or so? After that all units it makes can defend the base till the aging up process starts. I fear that always trying to attack keeps postponing aging till there is no coin left.