At this point do you think the devs are going to add operators on siege weapons?

Well, the question above, looks like over 1000 ppl is asking for them… 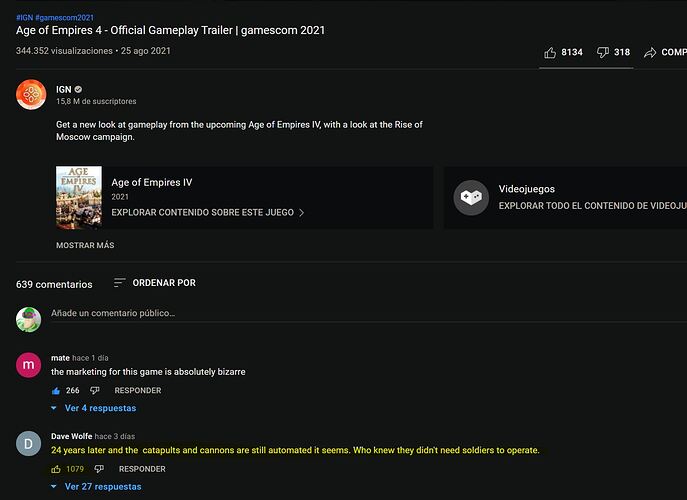 What is the devs reason to no include siege crew? I just hope we are not going to hear the “because age2 players asked for it”… 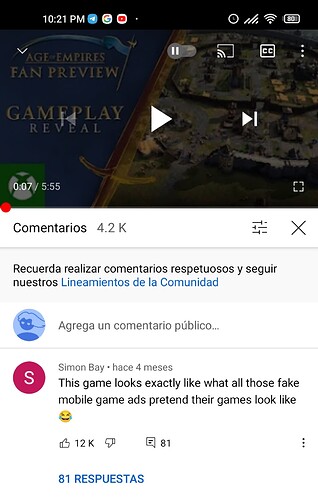 People here don’t realize that there many that don’t like the age IV presentation (art style ) this was criticized lot from 2019, even Microsoft with halo had to cancel the release from one year, people were mad about halo cartoon graphics and now they look a lot better…

A dev team that listen: 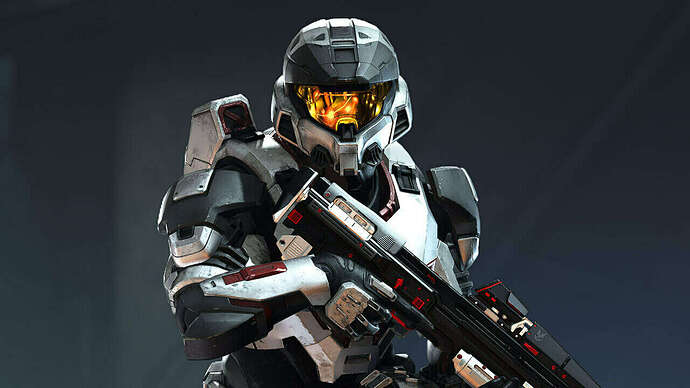 Halo dev 343 Industries admits that the Halo Infinite gameplay demo wasn't up to scratch, but showed off what the team has been working on to improve.

Devs won’t realize this will affect the game on steam reviews, they had a year to made small changes, add a little bit of textures to units and reduce the bright colors or allow an option do it game menu, but no, they will realize late again.

Of course they aren’t.

Okay, this is what I needed to know.

I would be okay if they for once just responded to all of us asking for crew and told us that is a design choice that is not up for negotiation.

There was an entire beta and so many of us clamored for siege crew. And not once did someone actually write back and say that it’s not something they want to do.

If its a design choice I will stop complaining sooner or later. Or stick to AoE3. But at least I can move on from hoping against hope that we’ll get siege crew.

Of course they aren’t.

and i agree with that. Golden ghosts are enough for me!

I like golden ghost man. They give good feeling to watch

What is the devs reason to no include siege crew? I just hope we are not going to hear the “because age2 players asked for it”…

Animating costs money. The less you have to animate, the better. It’s cost saving, hidden behind some artsy cover (the golden boys).
Packed siege is also self driving. Because animating 2 freakin oxen is also too much to ask.

They may also think of it as some sort of fan service to AOE2 players. As if having no crews was a positive feature in that game and people wanted to have it back, lol. What a bs argument. If anything was praised at AOE3’s release, it was exactly that attention to detail in a lot of the animation work.

Another argument is the reduction of visual clutter on screen… which goes right out the window, since the flickering golden boys are a ton more destracting than a smoothly animated crew. Even in peripheral vision your brain would ask what the f is going on over there.

Ahh the golden ghost and gden/blue UI the worst thing of the game.

1000 people like that comment
But then you can easily say with the 8000+ that simply liked the video…
7000+ don’t even care.
But yeah, golden ghost boys are quite cool and i like it.

Keep ignoring all the people that criticize the game ( UI, animations, graphics etc) at the end your guys will get a surprise.

They may also think of it as some sort of fan service to AOE2 players.

I actually think its this. As well as the goofy “wololoo” priest sound they’ve added. Those are both references to some of their older games. It would be such a minimal decrease in production cost to add crew. But often if the decision is made by the art director things don’t really change.

Maybe community feedback would have changed things but I highly doubt it.

They probably won’t and that’s great, It’s better for them to focus on things that actually matter

I don’t think will add, actually whenever a a machine is fired there are spectral golden images of people operating it. I don’t know why they didn’t add it might have run out of time. Actually ingame while playing they don’t look that bad, but will be wonderful to see siege crews.

Ancestors legacy has siege crews and when enemies attack they actually attack and kill the crew, if the player manage to kill the siege crew then they can take control of the siege equipment. I like such mechanics.

It is par of history and strategy decision making.

Those 16 units needed for trebuchet affect charge time. Humain do mistake and can make build time longuer. Tlhose units could be use for something else, like digging a hole under the wall, to make it colaps.

Or building laders, if the wall is unmaned. ( it is know that pikmen on wall use their lance to trow down enemy lader, Killing or hurting the men on the lader, forcing the enemy to use siege tower. You also don’t use trebuchet, because you want to recycle the wall for your own use. It is a free wall in the enemy base !!!)

Ahh the golden ghost and gden/blue UI the worst thing of the game.

Is that UI icons final…? I thought they were placeholders!

I can feal you deception and i feal the same way has you think, if this is the case. But i can’t speak about beta, sadly.

It will be good if you could man the building under construction, to do diferent timed work or man the catapult, affecting fire rate time and build rate time.

Those 16 units needed for trebuchet affect charge time. Humain do mistake and can make build time longuer. Tlhose units could be use for something else, like digging a hole under the wall, to make it colaps.

lol what are you even talking about. what is this contrived rng error system you are imagining?

You also don’t use trebuchet, because you want to recycle the wall for your own use.

what? Sieges happened and thousands of walls have fallen throughout history. Its not that hard to rebuild a wall after conquering.

I think if they did… they COULD take it a lot further. Kill the crew, enable yourself to steal the siege weapon. Any unit on foot can operate.

That is a very different mechanic, so I’m OK with them not adding it, but to be honest it kind of makes sense.