One thing to note of the change to stealth is that it will be a nerf to spies and native scouts which I don’t think needed a nerf. If 5 wandering muskets uncover a native scout that scout is as good as dead (especially since it will auto attack)

Ethiopia nerf are bad move. The only way for that weak civ to win is outlaw. You nerf their main strength and even nerf that main regular troops, Javelin Riders and

Also, I think it’s cool that they changed that one Tupi tech so it actually gives Ebony Archers poison damage, but I wish they’d also completely replace the tech that gives you pet cougars. I also wish they’d finally remove Mayas and Zapotecs from South American maps, as neither Mayas nor Zapotecs ever lived in South America.

Also replace Zapotecs with something else in the Incas’ American Allies card, because, again, they never lived in South America.

With the arrival of the new version, China’s various cards and economic structure have weakened, and the core gameplay has once again become single. Maybe the strength of the new version is weaker than before the tea export card appeared.
This Chinese civilization lacks enough interest, so that its process is always unitary. This change completely pulls China back to the era of two villages and then ff.

All the china fans are coming out of the woodwork in despair of losing there auto win status.

All they need to do is give the Blockhouse the Castle unit roster instead of the War Academy unit roster.

The problem with it is that you can put it up in transition and start pumping out units without ever having to build a War Academy. If all you can get out of it in age 1 is Flamethrowers and Mongolian Army and you actually need to build a War Academy, then the Blockhouse won’t be so broken.

250 export is too expensive for a blockhouse, and it should be 150 export imo.

look at to see Japan’s technology that locks the country, why don’t you think Japan is an op? Only 100export can be exchanged for barsracks or stable. The normal price is only 200wood. So here is 100export equal to 200wood?

The opportunity cost for the Blockhouse is way more. You can build it in age 1 and it lets you build basically every unit from one building.

Japanese also have to make things attractive in comparison to the Daimyo who not only trains a greater unit variety, but also buffs them.

Every sane person will be going with Portugal early on as Japan so this option is not even comparable. I think they should scrap the Military Rickshaw shipment and ship a Dojo Rickshaw instead. The consulate could even be made the method of Daimyo re-training and the wonder that does it now could just be a fort.

I have literally only used that military wagon with Japan by misclicking it. The block house allows shipments.

And blockhouse doubles as a outpost also.

The Blockhouse from the Russian consulate functions like a hybrid War Academy and Castle. It can also be rebuilt once destroyed and is not a unique building the Chinese civilization normally has access to through their base tech tree, so this is also effectively increasing their Castle build limit. It also provides population space. It really isn’t comparable to the Military Rickshaw that can build only a Barracks or Stable for the Japanese civ (which it already has access to).

The military rickshaw seems borderline useless compared to the other Japanese training options like Daimyos and discounted buildings from Portuguese.

Would it be possible to make them build a Dojo instead? I don’t think I’ve ever seen one built in a game and it would be interesting to see them appear occasionally.

Personally I use the military rickshaw occasionally in late age 2 for extra military production potential before I have the influence stacked for bushido principles. It is still one of the best export to immediate resource value techs. Clan offerings is probably the lesser used tech probably only decent in empire wars.

It can also be built from age 1 (I don’t know if it’s the same for China too). So you control the map before you reach the second age. 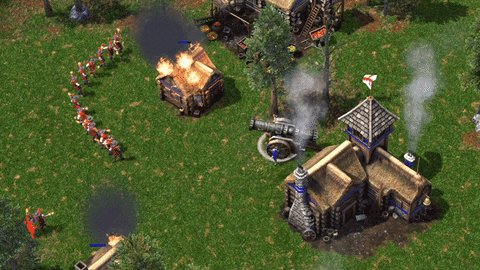 @
There's a new Public Update Preview build available in Steam for #AgeofEmpiresIIIDE, and access has been extended through the weekend. Check it out and leave some feedback in the Steam Forums! More info: https://t.co/3HgExRO5J2