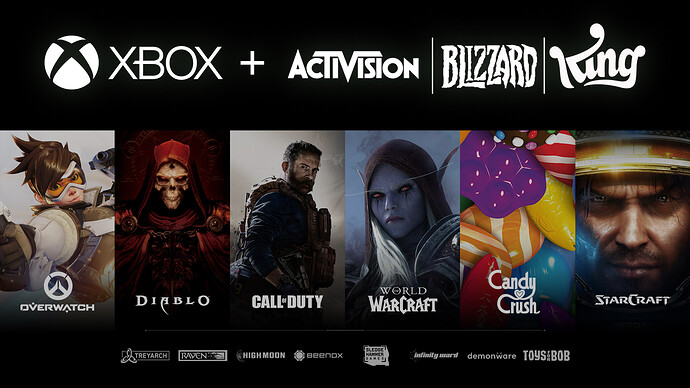 Welcoming the Incredible Teams and Legendary Franchises of Activision...

Creators of Call of Duty, Warcraft, Candy Crush, Tony Hawk, Diablo, Overwatch, Spyro, Hearthstone, Guitar Hero, Crash Bandicoot, StarCraft and more join Team Xbox As a team, we are on a mission to extend the joy and community of gaming to everyone on...

EDIT: It’s clear they do development listening to community which is good, but clearly the slow pace whic they fix things it’s killing the game because people get tired of waiting. Also I understand it was christmas holiday so let’s expect now is goig better the development

What do you mean that they should do?

Oof, best news ever. Now I hope in a years time blizzard is managing aoe4 and not relic. Or we get some new age games from blizzard

It’s too late for them to work on AoE 4, but perhap they can work on AoE 5, as even old as it is, SC2 engine is still far superior to Relic engine for a multi player focus game.

Have people not play Warcraft reforged or heard anything related to blizzard of late? Relic is bad there no arguing with that, but blizzard is in no condition to assist with anything until they fix their own problems

Pretty sure Blizzard need to sort out their own projects yet (say, Overwatch / Overwatch 2) before they attempt to attempt wish fulfillment for some of the posters here.

Even in their bad state, Blizzard still hotfix bugs in SC 2 faster than what Relic have done for AoE 4

Blizzard screwed up reforged badly and you want them in control of aoe?

Even in their bad state, Blizzard still hotfix bugs in SC 2 faster than what Relic have done for AoE 4

There were a bug with CC in 2020(which was way past their prime condition) and Blizzard fix it in 36 hours. Look how long did Relic take to fix the Abbasid spear range bugs? 10 days.

Massive deal and a huge threat to Playstation I quess.

And yet otger bugs lasted a lot longer. So grats to blizzard for fixing some bugs in 36 hours. They also had bugs take months to fix. Furthermore most of the old guard is gone and they screwed up reforged how badly? Still no ladder?

Yep, I 'd rather bet on frost giants rts even there are no Infos else than making a RTS.

Blizzard is not what it used to be. All the talented people left years ago.
And now what is left over was crumbling down last year.

All that left is Activision. Blizzard folks are working on a new RTS in another small company. Microsoft bought Activision to make them create new IP for them. The heritage from ActiBlizzard will be slowly cooked until demise of forgetfullness

Yeah uh, I think I’d rather almost any company to work on AoE4 than blizzard. Blizzard has shown their true self recently.

In practical terms, it’s generally incredibly difficult for a new team to take over development of a large code base developed by another team. I’ve known senior managers who think that programmers are as interchangeable as typists, but it’s not the case.

I’m fine with blizzard helping in modelling and civ design. Or even leading in some dlcs.
But the standard part of development should go to forgotten empires.