Game has a choppy framerate and seems sluggish, even in “Normal” game speed. (Possibly due to dual-monitor test?) When I move villagers, their animation is choppy and healthbars are choppy/flickery. It’s never been like this before. I even look at past video captures I made and it has always been buttery smooth. My vid card, CPU, and RAM are more than enough.

I feel like this first started happening when I tried enabling dual monitor gameplay for the first time on Monday using [SHIFT] + [ALT] + [ENTER]. It got very choppy during that test, and I feel it’s been choppy ever since, even though I promptly disabled it after that one test. The choppiness with single monitor isn’t as choppy as it was with dual-monitor, but is still quite noticeable, atypical, and makes the game a lot less fun to play. (I don’t even know why it got choppy with dual monitors in the first place.)

Navigating menus is also noticeably slower and laggy now. Even going from one tab in the Options menu to another can result in a slight delay, and even a flicker of a black screen between tab clicks sometimes.

I wonder if trying the dual monitors test screwed things up? I even see weird bars across top and bottom of main menu now, too, which I feel is related; as I don’t recall the menu ever looking like this:

Not sure how to reproduce the problem, but if it’s related to dual monitors, you can try what I tried…

please provide specs and settings you have the game on (video settings tab).

Ugh. I see the issue. Somehow my CPU took over the video settings!

It should be showing my RTX 2070 here on the Display tab of ‘dxdiag’, not Intel UHD Graphics 630. I did try to update the Intel CPU driver the other day; not sure why it would take over my Display device

I guess around the same time as the AoE issues, though, too, I changed my BIOS to enable an HDMI port on the back of my PC. (Which triggered Intel to want to update my driver.) Perhaps that HDMI port doesn’t pump out the RTX 2070 juice, but instead uses my motherboard/CPU for its output, which would be lame. Its location is higher up on the back of my PC than my vid card; but I figured it would still connect to the graphics card somehow. Perhaps not.

Guess I’ll change the BIOS back and see if that fixes… (tomorrow). But puzzle pieces are starting to fall into place. Thanks for having me double-check that, in a roundabout way 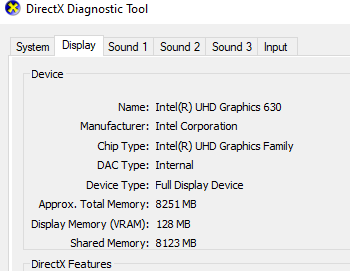 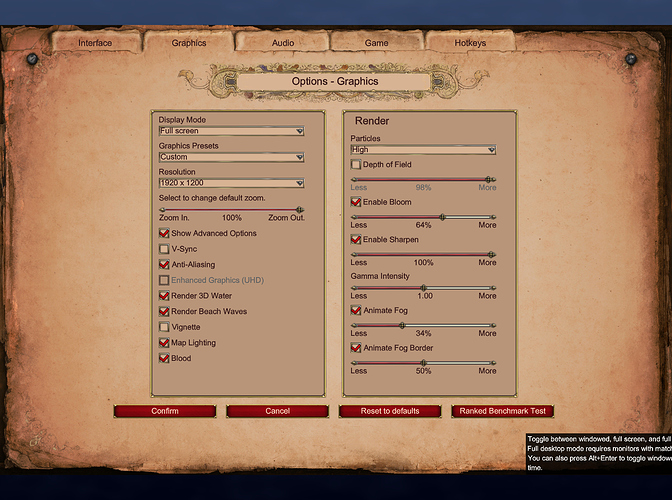 So you’re on a laptop?

Your monitors MUST be plugged into your graphics card’s IO directly in order for it to use it. It’ll only use integrated if it’s in your mobo’s IO.

So you’re on a laptop?

No, standard desktop PC. There is a separate HDMI port on the back, away from the video card, that I was using, but just for the last few days. I’ll go back to the video card later today, as I bet that will fix.

Lucky you caught it then

Your monitors MUST be plugged into your graphics card’s IO directly in order for it to use it. It’ll only use integrated if it’s in your mobo’s IO.

I was right and you are correct, problem fixed! Just plugged the monitor back into my graphics card port and disabled the integrated graphics option in BIOS, and voila! Buttery smooth framerate is back

Lucky you caught it then

Thanks! No doubt. I wasn’t looking forward to laggy gaming

Sucks that my RTX 2070 only has one HDMI output, though. Seems odd. But maybe DisplayPorts are the wave of the future? Admittedly, my monitors are ollllld and only have HDMI and DVI options. I’m currently connecting via USB -to-> DVI

DisplayPort is in general better for similarly timed generations with HDMI, but a decent Display port to HDMI cable (they’re often directional and only go FROM display port output to HDMI input) are the same price as HDMI -> HDMI cables though so, not usually a problem.

Oh cool! Thanks! I will have to look to buy a DisplayPort to HDMI cable. I assumed my monitor would need a DisplayPort size in the back… but I should have known such a cable exists, as they make adapters and cables for virtually every other combo