Playing Tamerlane co-op for 1-1.5 hrs, then tried to save a bookmark from menu and it crashed the game with an out-of-sync error: 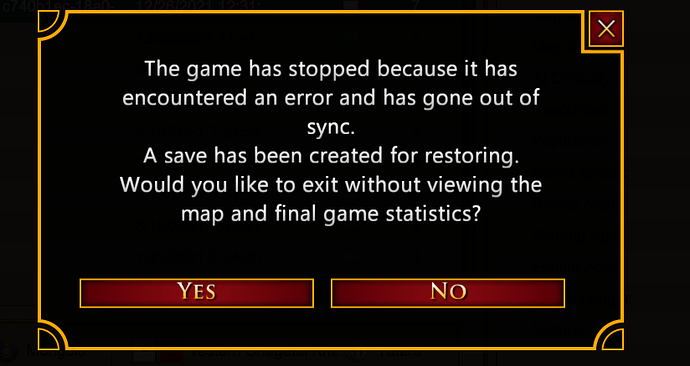 Then when restored, it switched players. While I was Mongols and my friend was Tatars before crash, upon restoring I became Tatars and friend became Mongols

This was the first time we tried co-op, so cannot comment on frequency of occurrence

PS: Still wish we could click the Game Build # on the game’s main menu to copy it to clipboard for pasting here, so we don’t need to ALT+TAB back and forth between the game and forum


Keywords for search: “The game has stopped because it has encountered an error and has gone out of sync. A save has been created for restoring. Would you like to exit without viewing the map and final game statistics?”

Not sure what you mean with “save a bookmark” can you elaborate?

When recording a game, you can manually save bookmarks every so often while playing so when you watch the replay, you can jump forward to your bookmarks. I think the hotkey to bookmark is F9.

Come to think of it, I don’t even know that I was recording the game?, but I swear the bookmark option was showing on the menu.

I’ll have to check later to see if I recorded the game. So much time has passed and I’ve been crazy busy and trying to learn Houdini more which takes a fair amout of my brain energy, lol

do you mean by save chapter? cause I’ve seen those and never knew what those do.

Oh, maybe? That could be (and probably is), but I’m not sure. I tried to check, but the game won’t let me launch without the other person joining the game, sadly. (For game restorations, it should, ideally, let us continue them without the other human being present, or put an AI in their place.) If it’s chapters, I also am not sure what it would do. I was thinking ‘bookmarks’ when I saw whatever word was shown in the menu; which we know what that does.

@IkoKnight8151, it will be a while before I can check what I was doing since it won’t let me restore the game without the other person being present. The game lets me click “I’m Ready” and “Start Game”, and plays the Mongols’ music as if it’s going to let me launch without the other human being in the lobby, but then the game actually doesn’t launch. It just keeps repeating the message shown in the chat area here every time I click Start Game. I have a feeling it was “Save Chapter” that I tried to do; if that’s what appears in the menu when doing co-op instead of ‘Save Bookmark’. 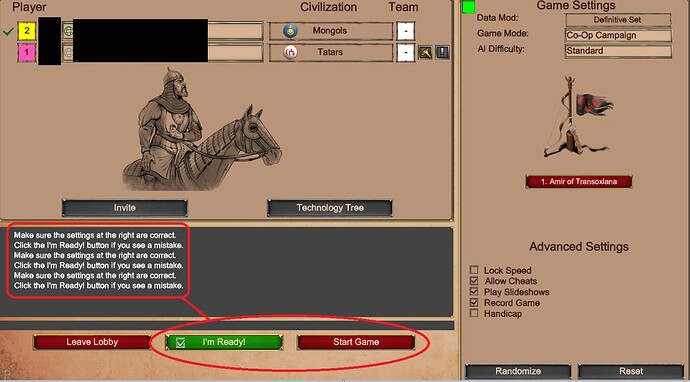 Sorry to make a tangent, but the messaging could be improved for when the above situation arises, if possible someday. (Assuming a restored game will never be launch-able if any players are absent.) A message example: “All human players involved in the saved game must be in the lobby and each must click “I’m Ready!” before the game can start.”