The issue i´ve expierienced is, that if you play with a party of 2 people in the Ranked-matchmaking, and you want to play 2v2, you get 4 bans. If you select 4v4 aswell, you only get 2 bans. So far so good. If you now want to play empire wars too, you select 2v2 in EW and 2v2 + 4v4 in RM. Now, you should get 2 bans for RM and 4 bans for EW. But you only get 2 bans for both game modes. Is this intended? It has been this way even before DM was switched with EW. This can´t be intended, since it makes no sense (if you de-select 4v4 in RM, you get 4 bans in both modes).

You should get the 4 bans for EW, if you select to play “2v2 EW” and you consist out of a party of 2. And you should, as it has been, have only 2 bans for RM, if you play with only 2 people. 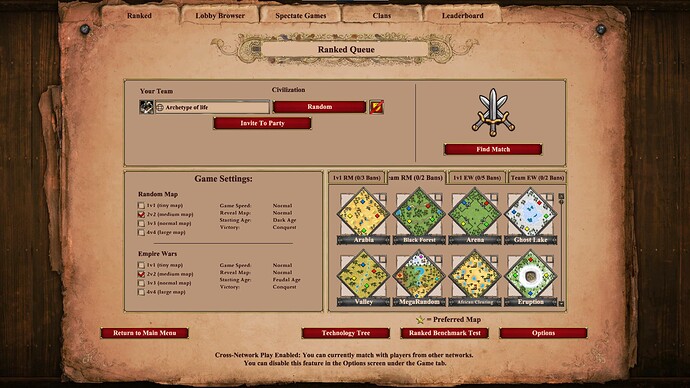 image1920×1080 232 KB
…i only have 1 ban each, even if i didnt change anything for EW.
Hope this illustrates the problem, even if i didn´t have a 2nd player (the principle is the same)

Hey @tyrannicking77
Thanks a lot for submitting this bug, we are now tracking this issue!