[bug] TC range does not increase with Fletching/Bodking Arrow/Bracerupgrades, but Tech Tree says so

This renders the Malian’s Unique Tech “Tiger” a lot less useful. The difference between range 6 and range 8 is… a lot of area.
The attack works correctly though. Also for chemistry.


Vikings too.
Haven’t tested whether the range is actually affected, but meh… someone else can confirm that.

This is by design, not a bug. Reminder to google stuff like this before cluttering the bug report forum.

Not clutter, because in that case I expended way too much effort to document a wrong tooltip in the tech tree. 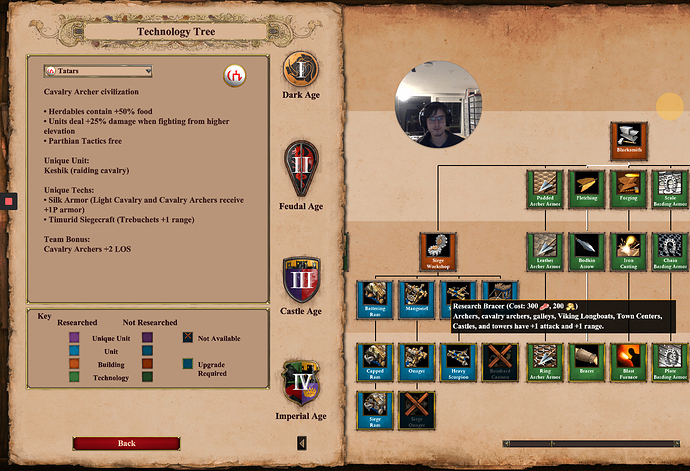 I did google it, now. Apparently the increased range is not a thing since 2013.
But the “the description has been wrong for 7 years, thus I’m cluttering the forums” is a bit uncharitable.
I don’t usually google things, when they seem to be obvious bugs.

In any case, I tried figuring out whether the new sheep-scouting behaviour is a “balance change” in DE.
It might be, and I’d be just cluttering the forum, which I don’t want.

My scout doesn’t “remember” where a bear has been in Single Player.


How would you go about figuring that out, specifically? I’ve been looking for a list of all changes that Age2: DE made, but I must have been blind.
If that exists out there, I’d like a link. [call me untalented at googling, if it’s findable, I deserve that]
TriRem December 15, 2019, 1:49am #7

Town Centers don’t get increased range from blacksmith upgrades since The Conquerors came out in 2001. But I agree that the DE tooltip is clearly wrong.

(post withdrawn by author, will be automatically deleted in 24 hours unless flagged)

Fletching / bodkin arrow never affect TC range. It’s a feature, not a bug - dating back to aok days.
Maybe you got eluded by the techs descriptions?

In that case the I would say the description is bugged!

It is, and not only in this case. Some units lack description about counters, too.
I’m pretty sure this is not even on the “to do” list of the developers.

It’s such a shame the devs won’t take as much as 10 minutes to double check the descriptions of techs and units when changing something… how can u explain to new AoE:DE players, that some of the helping text is just not true for over a decade…

It’s also true for spelling and translation errors - they only worked on these during the beta. C’mon, just make the intern do it!