4 Likes
Villager try to defend itself against elephant when luring
RudolfkingFPV January 23, 2020, 9:51pm #2

Great report! Happened to me a lot.

Welp it’s not a bug, it’s the same mechanic that makes your villies defend themselves against wolves.

This is not true, then the villager would always die to a boar.

Oops, I forgot to mention that hunters are the exception, because of boar luring (that’s why it happens when you missclik on a ressource, wich makies the villie not a hunter anymore)

Oh, so if the villager is forager, it will attack the boar back? But why is it working correctly, when a villager is lumberjack? If you task to wood then under TC, it works as it should (does not attack back).

Welp, sounds like I just found out that I don’t missclick enough on trees 11. Then I can’t really say anything else right now without testing more. Ok actually I will: maybe they decided that stragglers trees deserved a special treatment because there are near your TCs on most maps (ie.no nomad start).

This is a legacy issue.

hunters are the exception

I sometimes lure a boar and the vill fights back…

it depends of the current task of the vill (not his/her type). If the vill is just walking, he won’t fight back (even to wolf, at least in HD), if they are affected to a task (gather/construct/dropRessource/repair) , he will fight back

So a hunter missclicked on a boar would fightback?

This is the case for me, I see. 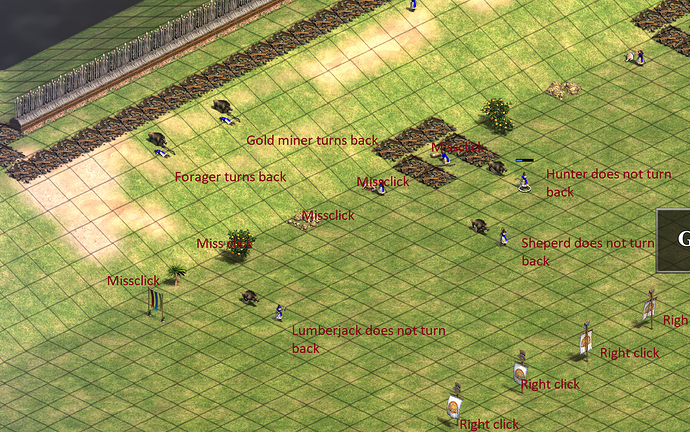 I don’t see the logic hence think it is a bug.

I tested it also on wolves and villagers attack back with the same rules as above.

Very strange… I don’t see the logic neither.

Ok, I think the logic is that the hunter doesn’t fight back to help you lure boar, and shepherds and lumberjacks do not either in case of missclick on sheep/stragglers trees (since they are ressources likely to be near your TC)

Thank you for the report and for the detailed investigation. I’ve put in a request to the team to see whether this behavior is intended, though I appreciate the amount of time you put into deciphering the behavior!

When trying to lure an elephant with a villager, he try to fight the elephant every time he get hit, which lead ultimately to its death.

I had this bug often when playing arabia.

Good day! According to the team, the issue with certain villagers turning back to attack lured animals is something that should be fixed as of the last few updates! If it is still an issue, please let me know and I will be sure to re-escalate the report the team.

Thanks to everyone for weighing in! =)

I experienced this issue before the may update (about two weeks ago). Not sure if it has been fixed now