DESCRIBE THE ISSUE IN DETAIL (below). LIMIT TO ONE BUG PER THREAD.
Before the 58259 update, in order to change a unit’s attack (or armor) through xs script, the function was:
xsEffectAmount(cSetAttribute, UNIT_ID, cAttack, ARMOR_CLASS*256 + VALUE, PLAYER);
After the patch, instead of 256, the multiplying factor must be 65536, but just for cSetAttribute. For cAddAttribute or cMulAttribute, it still needs to be 256. I suppose that the intended behaviour was to update this factor to 65536 for every attack/armor manipulation, not just cSetAttribute.

What was SUPPOSED to happen if the bug you encountered were not present?
In both tests, only the blue skirmisher should receive 10 armor, either by setting or by adding the attribute, since the multiplying factor was supposedly updated from 256 to 65536. 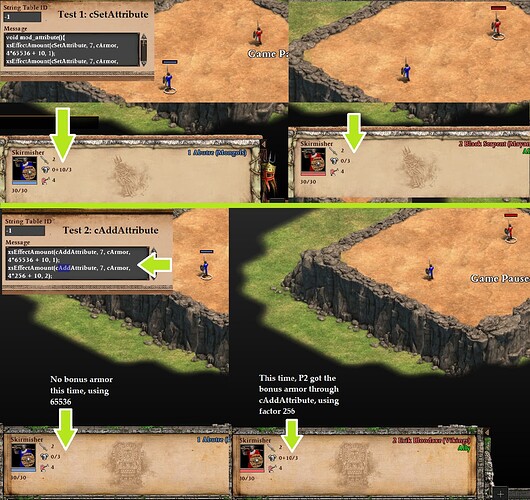 Sorry for the delay. We are now tracking this issue!

Hi,the officials,I want to make the smiliar effect like the Sicilian silver tech – The first crusade that can spawn some units from the TownCenter.But I cannot find and reach the effect through XS,can you tell me how to write the parameters of the xsEffectAmount() in order to take it work?Thank you.