Can you spot the difference?

They both have simplistic UI I guess?

I don’t consider the game on top to be somehow bad or anything.

Why does it matter???

I honestly don’t know lol.
I don’t consider simplistic UI to be bad by default.

I can’t even tell what point you are trying to make.

The above is “Diplomacy is not an Option”
Below is “AoE4”

Or did you want another answer 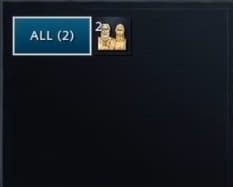 …and has more character.

I have quite a few problems with AoE4’s UI in general, most notably the lack of control over individual units when selecting groups, but this image doesn’t really say much about anything. Just… they have similar layout styles, I guess? Which will also be kinda similar to most RTS games.

The main thing missing is a detailed info window with unit portrait and unit stats. And yeah it’s simply a bad design decision, not even going back in time, since AoE1 had it already.

Since it’s mentioned here- I’d like to say ‘Diplomacy is not an option’ is a super cool and promising game. I had a blast with demo. Cratches just the right rts-strategy-survival itches. One of the best since ‘They Are Billions’.

A lot of great demos to check out in that Steam Fest btw.

in age 4 you can easily know which building to build including hotkeys, and also see which age they are available. thats great imo.
I dont think the general info can be compared (left window) as in one game a building is highlighted, in the other its a vil.
Also in Age 4 you see all resources, houses and (idle) vils, plus the number of vils on each resource. Long story short: age 4 gives you much more info on a glance wothout needing to look elsewhere.

The minimap on the upper shot is left, which us unusual, but also much vlearer. I assume becuase the map is smaller though.
I thought age 4 Minimap was hard to read. Maybe zoom on minimap would prevent that

not sure why I am even writing all this, as you probably just wish to troll, but hey, these are my 5 cents.

Simplistic UI is fine. It’s easier to learn for new players, as there’s no unnecessary details that the user has to analyze for determining a button’s purpose.

Here were the only problems I found with the UI:

Other than those problems, the UI is fine imo.