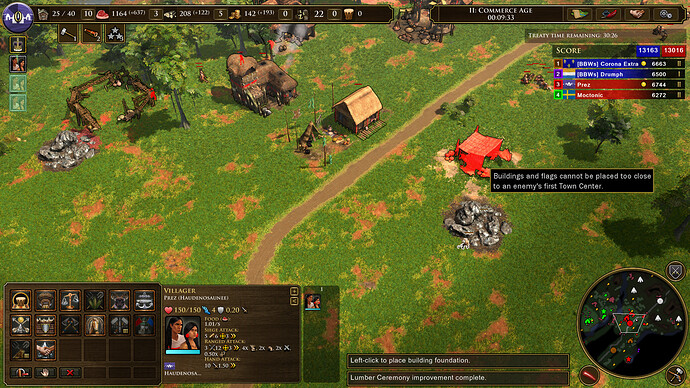 In Nomad Treaty if both players go forward with their covered wagons and make tcs close to each other then North American natives can’t mine their own gold if it’s within range of the enemy town center even if it’s pretty close to your own tc. running around mining far away mines before the enemy can is a big part of treaty and if the north american natives can’t do that they are a little bit nerfed compared to other civs.

Well this isn’t technically a bug.
But maybe natives should be able to build their tribal marketplace within TC protected areas, since villagers can gather other resources there just fine,

This isn’t technically a bug. This is you trying to build too close to an enemy’s first Town Center.

Every civ has their strengths and weaknesses. The Hauds and Lakota needing a building to use mines is theirs.
Maybe pick a better starting location in the future?

Its nomad, he has no clue where the other guy will plant his TC.

In general, I really dislike inability to build near enemy town centers. I dont think there should be a restriction at all.