Trying to spectate a ranked DM game but it says my rating is too low for that (btw, one of the players has the same ELO as me).

I should be able to spectate the game. 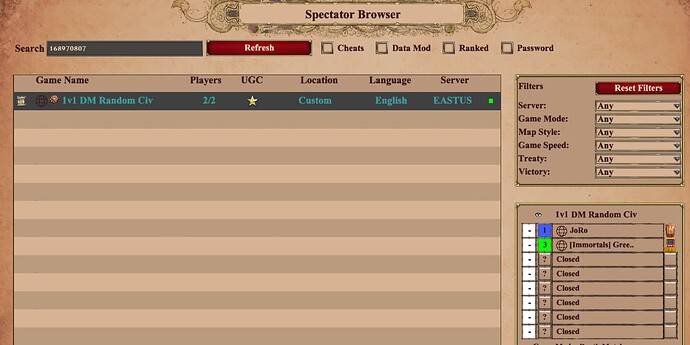 It seems to think you want to join as a player, rather than a spectator, which isn’t the smartest thing the system could do.

Unfortunately we are unable to reproduce this issue, is there any settings we should be aware of?

Hi!
I THINK maybe I tried to spectate through the “spectate” option in aoe2.net, but after the first failure I copied the room number code, pasted on “search” and tried to open directly through the game, as in the picture. I tried many times and got this message in all of them

Unfortunately we were still unable to reproduce the issue

I have reported it, but do let me know if it happens again and any potential steps/causes!