Is it just me or is china bannanas op now?

450w shipment in age 1 with no build time + trickle rate of 0.4 + can get at least 1 trickle in early age 2 without 300exp card + ability to train full roster of units unlike before where you’re stuck with either the rax or the castle.

You also make civs like Haudenousaunee have an in-base war hut since you can spam more units than he can. His win condition now is to semi ff, lol.

Plus, the ability to safely naked ff with the additional protection of a blockhouse in base buys you so much time and protects your villages.

Hmm, how does one go about it without taking away their newfound openings?

I think that you have to reduce the food that the summer palace gives you due to age advancement, or eliminate the 700 gold and change it for a 600 gold crate.

Then that will only hurt their naked ff (Northern refugees > 700c > 700w) won’t be viable anymore, and one would be forced to send tea export as the second card always. Or be forced to play colonial.

i think if im being honest, 100% here, the summer palace is too strong. its 400f and also lowkey something close to 7 vills worth of unit production. I am not sure the solution but reducing it to 300f would be a step forward? I think a challenge with china is the line between their early slow weakness and their scaling snowball of like, 14 different units

I really like the new card, I think its great. I do however think a change needs to be made so that summer palace isn’t their only option to qge 2

The combination of 400 food and the food cost reduction from the german & russian consulate makes china scaling really strong now I think.

I am still in favour of just removing the trickle from the export card and just make it a lump sum of export. I never buy the argument that since exports have to be spent in batches that its not good since china basically do everything in batches anyway.

Glad to see I’m not imagining things. I haven’t won a game against China in a long time now.

Chinese used to too weak in most of MUs, look at the FPL Winter Tournament data, Chinese even can‘t win a single game before the latest patch. 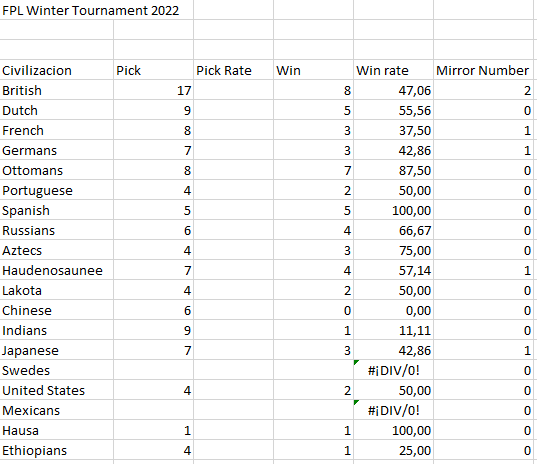 Now Chinese just returns to the normal civ level with the new shipments. By the way 225 exports for a russian blockhouse are expensive imo. It should be 200 exports, because it cost 375 wood to buy a 275 wood blockhouse wagon (250 wood + 25 wood vs) compared with French consulate 300 exports for 500 wood crates.

I would argue the value the blockhouse bring is much greater then its cost.

the fact that its a combined war academy + castle (its only downside is lacking upgrades but for age 3 play thats moot) so that alone is arguably 500 resources worth of value, not to mention the 5 pop it provides.

The additional problem is that it is great synergy with china’s traditional plays. I have always said that the best way to improve china is give it a defensive option and the blockhouse has proven that to be the case (and then some because of the consulate effects).

The fact that you can get the wagon out in transition or early age 2 is arguably too much cause it gives china flexibility to ether be defensive or just forward very quickly and for a civ whose main strength is spamming shipment that flexibility is very strong.

The best adjustment is just to adjust it such that you only get enough for the wagon at around the same time as the 700 coin shipment for age up, so around 300 export or something.

That way its still defensive while giving the opponent a timing window, and if you want to do age 2 play just send GFA.

The consulate card can give you a blockhouse,but at the another hand you ll aging with 13p and 30 population limitation.
The result is that you need to gather 80 wood to build a village,that will be slow for your rush strategy.For instance,assigning 4 villagers to building the wonder to ensure you can advance to age 2 before 4:30,therefore,only 9 villagers are working when you at aging.It s hard to gather 260wood to train the chukonu and pikeman army that costs 180wood.
If you want to go FF.You should choose another card to get 3 villagers,so you can advanced to fort age faster,but not the consulate card.

But you get a blockhouse and a consulate instead of 3 villagers,pal.

3 vils in good without a doubt but remember for china often timing is more important then pure eco.

the age 2 and age 3 play is shipment spam, so lacking 3 villagers isn’t a downside

There is a reason the 2 villager build was commnon before, china doesnt need to go 3 vils often times if you can get the shipment spam more safely.

with the blockhouse, china can basically do a russian style forward with 7 steppe except china has even more age 2 shipment then russia, so lacking vils isnt a problem. Russia has 3 age 2 millitary shipments, china now has up to 6.

Also since with the russian consulate you train vils faster and also save food from training vils, you scale harder. you can also send northern refugees later to get more vils.

ive been saying for years that china doesn’t need to ship refugees age 1, the whole civ is so tempo based and the units are so cheap that unless you are at a very high level where a few dozen resources might affect outcome… you should ship something else. I favoured 300w for years and sumptuary laws on no tp maps, but now this consulate option seems too strong not to get. also-german trickles are terribly overpriced, not a fan. Dopps however… those i definitely like. and cheaper banners

Chinese used to too weak in most of MUs, look at the FPL Winter Tournament data, Chinese even can‘t win a single game before the latest patch.

Now Chinese just returns to the normal civ level with the new shipments. By the way 225 exports for a russian blockhouse are expensive imo. It should be 200 exports, because it cost 375 wood to buy a 275 wood blockhouse wagon (250 wood + 25 wood vs) compared with French consulate 300 exports for 500 wood crates.

If you look at the most recent tournament, China seems to rule after the new patch, the only loss is in a mirror matchup:

Maybe people did not figure out the right was to use the new card ?

I don’t know qbout decreasing the cost of the blockhouse from 225 to 200. Did you make some experiments? I think 225 is fine if after sending Tea Export as first card, you can quickly send the blockhouse and have it finished before reaching age 2.

But you get a blockhouse and a consulate instead of 3 villagers,pal.

But you do not necessary get a blockhouse. So it is either 3 villagers or choosing between:

But that block house is also a military academy, so you win 200w, it is also a castle, so another 250w and 50G. Now i can’t even do my lakota allin anymore

dont forget 5 pop, so like a fourth of a village as well

It’s funny that you mention it, I did those stats, and China lost everything until the patch, when the patch came out, China was picked 4 times and won everything, except one game, which was a mirror where the player who used a New Build Order won by a very large advantage over his opponent who opted for a classic Build Order.

Well I just wanted to clear that up.

I dont think Aizamk is a good example to use when talking about whether something is good or not, it just doesnt apply to him