First, I would like to thank the developers for this DLC.
Although, I’ve only started to delve in it, it already seems to be fun to play. I’ve personally been waiting for European content since first vanilla, and embraced the addition of Swedes in DE.
European flavor brings a lot to the game, and I’m also happy AOE3 is supported at all.

However, some decisions and the rendering of history seem dubious to me; I would still like to see Poland-Lithuania as a distinct playable civ, or at least a revolutionary civ for Russia, Swedes, and Germans. Oh, and Germans — still hoping them to be split into Prussia and Austria some day.

But this aside and straight to the point.

The Cossack daredevil (as it stands in Compendium, and as it was announced), or the Cossack rider (as it is tagged in the game).
Though I’d say, in my opinion it still could be implemented better in both graphics and mechanics, my concern here is the language he uses.
The developers have done a great job representing various cultures and ethnicities, and the changes of DE showed their competence.
However, I would like to stress, that this unit should reply in Ukrainian, not Russian.
Russia as a civ has its own Cossacks, and the compendium info itself describes Cossacks as relevant to Ukrainian history and culture. I can go deeper in history, but really any brief look at Wikipedia (or news, if anything) should make it clear. It’s just laziness/negligence. 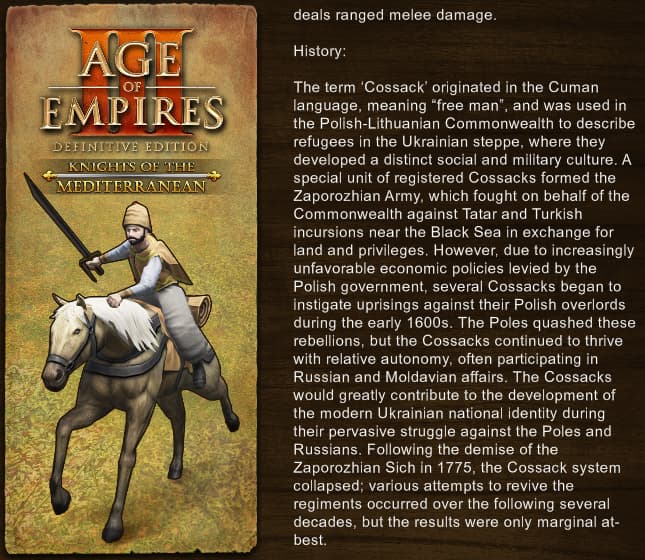 image645×560 81.7 KB
Come on devs. You can do better, and I’m sure finding a Ukrainian-speaking voice actor is not much harder then Nahuatl, Amharic, or any other rarer ones, given the Polish Winged Hussar, being seemingly only Polish unit in game does speak Polish.

Really looking forward to see this fixed in later patch. You can do it.

Another unit from Polish-Lithuania is Jagiellonian Shock cavalry.
This one is just random. Its name is descriptive and not tied to any historical formation, and the attire is seemingly unhistorical.

I would suggest changing this unit into Lisowczyk or Registered Cossack. At least name-wise, if redesigning him is too much of a hussle.

I agree it should speak Ukrainian. Also here’s more details on it: