Death Match should disappear from ranked

Well, I don’t say we must get rid of Death match totally, but the ranked queue should make way for other game modes.

The numbers are devastating, there are probably more smurf acounts on 1 vs 1 RM that people who play Death Match.

I like Death Match, but I also like other game modes like Battle Royale, Regicide and Empire Wars. Quickplay has been a total failure. Nobody uses it. Last time I try to play EW or BR I quit after 15 minutes waiting.

AoE II has a rich variety of game modes and all of them deserve and opportunity.

My proposal is that each month or with every map rotation the second game ranked mode rotate as well. Next time could be Empire Wars, and the next Regicide an so on.
And maybe in a year leave the most played game mode or continue the rotation, whatever the community likes the most.

What should happen to the second ranked game mode?

Leave RM and DM in there but add another ranked game mode for Empire Wars.

Other: I think Empire Wars is enough different to RM to have its own ranked ladder.
Battle Royale too, but I think is not really popular, it is most like a CBA scenario type of game.

Leave RM and DM as they are, and add a rotative game mode which could be any of the following:

This rotative mode would have its own ELO of course. 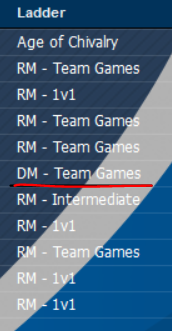 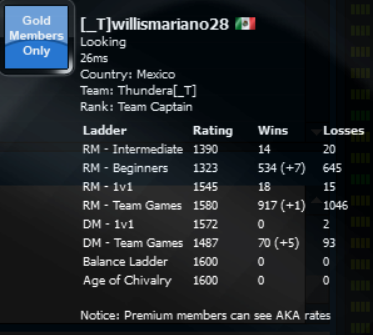 You don’t really need to re-invent the wheel

Unranked lobby is a beast played by 235 543 people in the last month.

Proving yet again that absolutely nobody likes Matchmaking and would prefer a Lobby System, x4 more player play Lobby System because this matchmaking is just unbalanced and pretty much roll the dice + no skill required because you can pick without the punishment of the enemy knowing your civ (for counter pick)

Too much options and people ignore them, like quickplay.

People ignore quickplay because it’s not ranked nor balanced, it’s based on your location. That’s to play quickly

I think the lobby system is more suitable for newbies who fear ranked, most games there are only for noobs. But probably this conversation derive to the alt+f4 problem xD

I cant think of a good reason why we would delete DM from ranked. Based on its history it has proven to be good. There always has been a DM ladder on Voobly (and probably also on even more earlier versions). Also there has been multiple high level DM tournaments in the past. So even it is currently not that popular, i still would not delete DM from ranked.

On the other side we could add new game modes to ranked as well and give them its own seperate ladders. I mainly consider the following options for new game modes for ranked:

Other game modes have prove to not be popular at all. Yeah, there are some regicide or KOTH game, but those are mostly played by friends, clans of community games of streamers, … Ranked isnt made for such games. If you are with 8 friends and just want to play a FFA KOTH game, then you wont need the match making feature. Also games against the AI have no place in ranked in my opinion.

I do think ranked need the way to go. The lobby is for playing thing friends, clans, community games, tournaments, … Kind of all the games with already enough players to start your own game.

I am still surprised that there are still that many players that play unranked. Based on the number of players it is very large. In the lobby i expect a lot of players who play against the AI, a lot of players that are just play very infrequently and those who only play with and against friends. If there are big other groups still playing in the lobby, then we should look on how to integrate those game into ranked in my opinion. In the end ranke should be the way to go for most games and the lobby is for some niches.

Proving yet again that absolutely nobody likes Matchmaking and would prefer a Lobby System, x4 more player play Lobby System because this matchmaking is just unbalanced and pretty much roll the dice + no skill required because you can pick without the punishment of the enemy knowing your civ (for counter pick)

Complete disagree. If i compare my average Voobly game to the average DE game, then i can just draw only one conclusion: Match making very much improve the balance of games.

Only issue at DE are team games. The TG elo is bugged since release.

After a fix, the TG ratings will also be fine too. I am pretty sure about this statement.

I think the lobby system is more suitable for newbies who fear ranked, most games there are only for noobs. But probably this conversation derive to the alt+f4 problem xD

I dont think the lobby is the place to start for newbies. You will never have balanced games. Newbies get stomped over and over again. In ranked you end up at your true elo after some games and you play against other players of equal skill. You cant really have that in the lobby.

Best way for newbies is to play Art of War to understand the basic and play some games against the AI to see how a game in this game is played. After the basics you can join ranked.

I think it is more likely to be an issue with the name. If it wasnt called ranked, but match making, then the fear for the ranked would be much less.

This is your opinion as usual Deathcounter. Most people like matchmaking, it’s always the usual few people who complains about it.

Lobby system is worse because you can pick your opponents.
Also, can we stop with that dumb ■■■■■■■■ of the no skill required? Picking civ without knowing what the opponent is going to take is pretty standard. Also, why tf you should be allowed to pick as the second player and thus counterpick your opponent? Where’s the skill in that?

And i already hear you, “then just go random”. You can go random if you like it, i have an account where i play always random + no bans, but I don’t have the presumption to impose it on other players

Can’t have em all, over-options are the death of online multiplayer

Prime example is the Master Chief Collection. Halos 1, 2, 3, and Reach had massive and poular communities. Release em all as one game and the playerbase becomes so divided that you can’t find a game for any of them.

Obviously random map won’t die, but more side modes just means more dead modes. You could even see it taking down the populations in the lobby and death match

Honestly it doesn’t make any sense to keep the DM TG ladder, nor adding EW in TG’s, in fact i think that game mode would be played even less than dm, but they are just keeping it for nostalgia.

Well, they just announced that Death Match will be replaced by Empire Wars in the next patch: Empire Wars is coming to Ranked Play – Age of Empires

How difficult is to have 3 ranked game modes?
Just add a third one: Empire Wars and leave alone DM

How difficult is to have 3 ranked game modes?
Just add a third one: Empire Wars and leave alone DM

While i do think EW will be much more popular, i dont know why they removed DM. Just add EW as third options in ranked…

Why to remove DM tho?! Just keep it alone and add EW what is the problem?! And EW is more boring than DM, especially it will trun on specific civs picking for their advantage in the feudal age, it is so boring and remove many strats like drush FC, Trush, M@a and reduce the scouting effect, I never liked this mode tbh, DM is much better especially you will already play it mirror, maybe we will see too many mirror in EW since there are many civs have the advantages over others in feudal.

And EW is more boring than DM

That is an opinion, not a fact.

it is so boring and remove many strats like drush FC, Trush, M@a

RM is nowadays more focused on getting to castle age quickly. You dont really see expanded feudal wars / all in feudal approaches in many RM games. In EW i expect more all in feudal aggression. This means others strats are more important. I wont consider that as boring. It is just different.

I think most players think Dark age is most boring part of the game, since it is ‘just’ setting up your eco. There isnt really any battle at all in dark age. So getting rid of that part of the game, makes it more fun for those players.

I wont be surprised if EW became much more popular then DM now is. If RBW continues, then it would be even more popular. So in the end i think it is a good idea they added EW.

Why to remove DM tho?!

I dont understand this as well.