It has been two weeks already since we meet at first hand the first Age of Empires IV exclusive gameplay trailer at the XO19, leaving us all perplexed, exited, and very anxious to know more about Age IV. But that short trailer of just one minute long, was enough to see a lot of things and details if we slowly follow it step by step.

So here are my guess and thoughts about what i could see in both, gameplay trailer and Behind the Scenes videos, so let’s get started, shall we?

They have similar arquitecture than English buildings (same style, like the two towers on the barracks)

Here i found a curious thing, looks like the towers can be build just over the walls instead of any place like previous Age games. Look at how the tower dissapears at the end of the trailer but the wall still there, intact, instead leaving a hole in that space. Seems that just occupies a different space over the walls, and the Outpost are the ones that you can actually build outside your base to gather a mayor visual over the map. 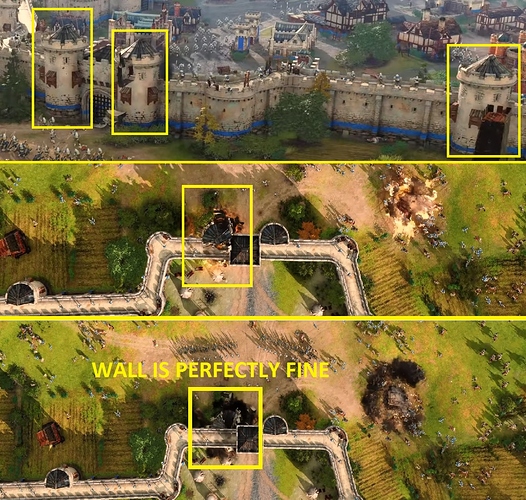 About the outpost i have this really strange feeling. It’s suposed to provide extensive line of sigh, but in both cases in wich we can see them, they are built very close to the base, instead a little bit further. This makes me think in some kind of restriction at the time to construct some buildings, like if they were available to place them only in certain area of influence (reminds me of Rise of Nation and other games with this mechanic). 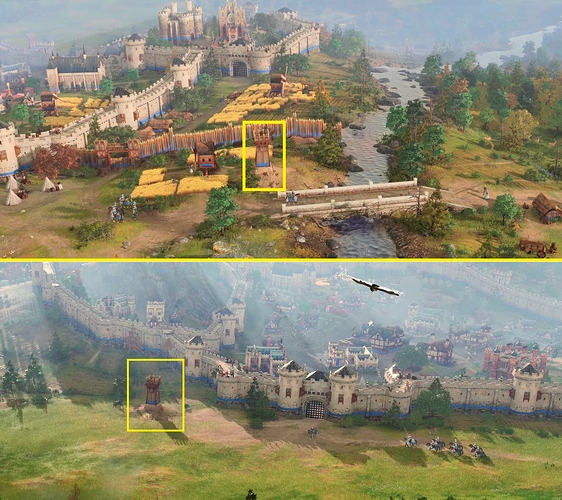 Here is another thing that makes me wonder. In the picture we can see both Archer and also Crossbowman, wich is kind of weird thinking in the previous AoE games were one is the evolution of another. So… maybe the Crossbowman comes from the Archery Range and the other archer is the classic unique Longbowman from the Britons? 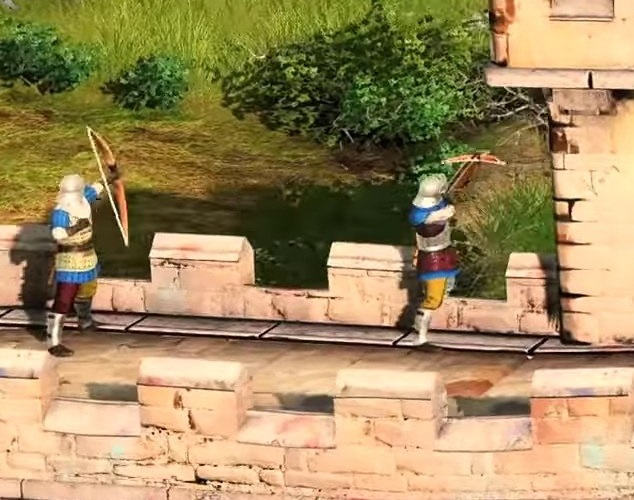 Well that’s all i could see and imagining for now. Of course all of this ar my thoughts and guesses but well, meanwhile we wait, patienly, for another hint or video, we can disscus and think about what Age of Empires IV will become.

Really enjoyed your deconstruction of the trailer…keep it up!

Thank you! I’m glad you liked it!

I will make another one of this the next time they release another video.

There is still more to be found in the Behind the Scenes video.

Here’s one of the writeups composed on it, to give you pointers in what to look for: https://www.reddit.com/r/aoe4/comments/dyuew2/all_the_info_i_could_gather_analising_the_trailer/

That’s pretty cool! There was some things that i didn’t realize and others that i rather not to post because picture quality. But it’s a nicely done job!

Trebuchets : and now is where I’ll made a stop.
They look like classic trebuchet from Age II but, why nobody is driving it? I could understand that before in Age II because the technology at the time but now? it’s a pitty in such detailed game like AoE IV looks like that a trebuchet works like an automated weapon. Even in old game like Battle for Middle Earth from 2004 have units managing catapults.
Hope that thing changes. It makes the game more realistic, like for example the fact of actually seeing people inside the buildings, archers training in the Archery Range, or Guards walking around the barracks. Those are the details that also make the game more beautiful and realistic. It’s just my opinion.

I totally support this!

Castle (Looks like they’re going Fort style of AoE III wich is a very strong building that can be build just once. I rather this option instead of castles of AoE II wich you could build them limitless around all the map. If is like the AoE III style i will be very happy with this new change)

I don’t think it’s a good idea, that would change the gameplay a lot, maybe make a bigger delay for construction but not like just 1 castle and less on the same place. It could be more “realistic” but definitely not fun in my opinion.

About the outpost i have this really strange feeling. It’s supposed to provide extensive line of sigh, but in both cases in which we can see them, they are built very close to the base, instead a little bit further.

Remember that it’s just a trailer. They put it this way probably because somehow looks good I think. Also in some cities on the campaigns of AoE2 we can see outpost close to the walls like this.

Best post since the trailer. I’ve been waiting for one of these.

Best post since the trailer. I’ve been waiting for one of these.

Thank you! I really apreciate it! I will be doing more in the future!

I don’t think it’s a good idea, that would change the gameplay a lot, maybe make a bigger delay for construction but not like just 1 castle and less on the same place. It could be more “realistic” but definitely not fun in my opinion.

In my case i felt it fun because of the strategy that it brings. Creating such a strong point with the fort in an strategic path of the map, fighting for control. Besides to be realistic it was fun to me place the fort in different ways, offensive near the enemy base, etc.
In Age II castles felt like just a really strong tower. Surrounding your base with 6 or 8… Had the same feeling in Age of Mythology… I don’t know it’s just no so fun to me. I rather having a casttle that is 2 or 3 times stronger, with unique cualities (after all a casttle it’s a unique and big building, need to be something special and different from the rest) and think about where i can place it, as a defense inside my own base or offensively in a critycal point of the map.
In Age 3 You could have up to two forts (three with the French) in a game even at the same time, but once you loose them, you can’t build them anymore, and that maybe it’s a little extreme, i agree with you in that point.
Having a limit cap of castles to build in game (such as 2 or max 3 in late game) would be fantastic at least for me, but always having the option to build them again if they are destroyed.

Excellent done. I think that the trebuchets need a boulder wagon and a few operators including animation of shoving that piece of rock to the trebuchet. Building 16 looks a lot like the factory from AOE III but regarding the design it’s a traditional warehouse. No. 14’s Blacksmith, Goldsmith or maybe a Tannery (the top one)?

Thanks!! Really apreciated ! I like the trebuchets idea aswell, their reloading time fits perfectly for an animation with a boulder and people loading it!
Hmm i haven’t thought about the tannery, that’s a good idea well done!

Having a limit cap of castles to build in game (such as 2 or max 3 in late game) would be fantastic at least for me, but always having the option to build them again if they are destroyed.

These it’s actually kinda interesting and a bit more realistic, but it would change a lot the actual gameplay (and for the record, that doesn’t mean it’s something bad I’m just confirming that it would change the gameplay). Maybe making castles “specials” like you say would make this idea work because with the way that the castles are now will definitively ruin the game.

If they really go for realistic the grenade like explosions should be changed. That’s the only thing I thought of as not suitable. At the top view it looked too much like DoW or any modern warfare game alike. Also if you limit the number of build castles thou should also limit the rock supply of trebuchets. I have been thinking about a supply chain of rocks to the trebuchets in order to reload them. That would be even more realistic and offers new tactics and need to micro routes. So to defend against them you should cut the supply to them, because running into huge armies upon hills isn’t the smartest thing to do anyway.

That would work great, i have been thinking about supply and ammo limit. It would be more realistic and would bring more strategies but i’m affraid to make the game even more complex. For me it’s just fine but for some people and newcomers can be too complex or even not feeling like an AoE game anymore. Imagine adding arrow mechanic aswell.

Nice work on breaking down what’s on these screenshots.

One thing: the archer on the left isn’t a longbowman; or, rather, if he is, it’s wrong. He’s using a shortbow, not a longbow, which would be 5’ or 6’ long. This was actually modelled more or less correctly in AoE II, and yet in AoE III I seem to recall the longbows being quite a big shorter, as in the screenshot here.

If that guy is a longbowman then they need to resize his bow.

Talking about scale that’s pretty accurate and right. I just suggested about a Longbowman to justify the two different types of archers at the same time. After all they’re the Britons and fits perfectly. Dunno really another reason to have both types of unit at the same time. Even in Age III the Britons had Longbowman instead Crossbowman like the other Civilizations have.

Thank you for the great trailer breakdown. With regards to the trebuchet crew, I’m sure this is something that will eventually be added - this is still an early-stage trailer.

Artillery in Age 3 had crew, so I don’t see why they wouldn’t plan on doing this for Age 4. Probably just haven’t gotten around to it yet.

It makes sense from a gameplay perspective to limit castles, but I think there should be a compromise. Not just one like in Age 3, but maybe a max of 3 or 4.

I’m really ok with that amount as long as it has a reasonable limit and won’t be spamless. As we could saw above, there are a lot of buildings variety, so i wonder wich role will the casttles occupie now.

Great analysis, I’m very disappointed on the course the franchise is going, I’m talking as an AOE old school player, this doesn’t look like AOE.