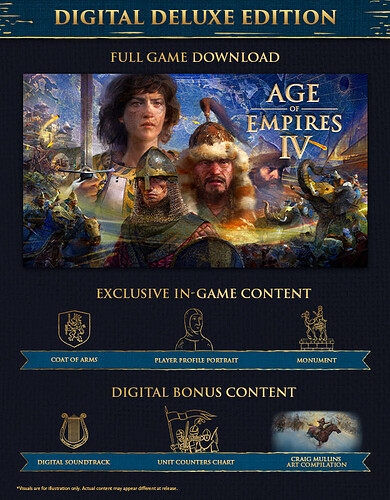 I saw that we I post in my thread the screenshots , really cool

I think I want that sweet deluxe edition!

I want to buy it now

Very beautiful artwork, do we know who made that?

As of 15 minutes ago, the store listing has been removed. Check steam db

Hmmm… Very strange. I added age of empires in my wish list yet at april, but today it was remove from my account. And AOE4 disappeared from steam.

Probably wanted to save it for E3 and uploaded it by mistake. Either way, the artwork looked lovely.

Though the Deluxe Edition doesn’t sound that exciting for me, personally.

Maybe it mean that they want to start preorder in E3…

Yeah just checked, the AOE 4 page is completely gone when you look it up on steam
That’s strange because they have had it up since the fan preview

They’ve updated it too early I guess.

Some civs which haven’t been announced seemed to have been shown via the screenshots.

Yes she will be back after the conference I think.

I don’t see it listed in the steam store which is weird since I had it on my wishlist.

There was a bit of a blip.

We need a physical Collector’s Edition, please. My shelves full of games with all big box and collector’s AoE games need their new brother here, too.

lile the unitcounter chart, that will be interesting. And shows its still there. BUT I dislike the fact that it deosnt say anything about DLCs. Maybe there will be a bigger version, or season pass.

ohhh I would LOVE to get a collectores edition