There is no other way to put it…

This simply does not look good for an AoE sequel: 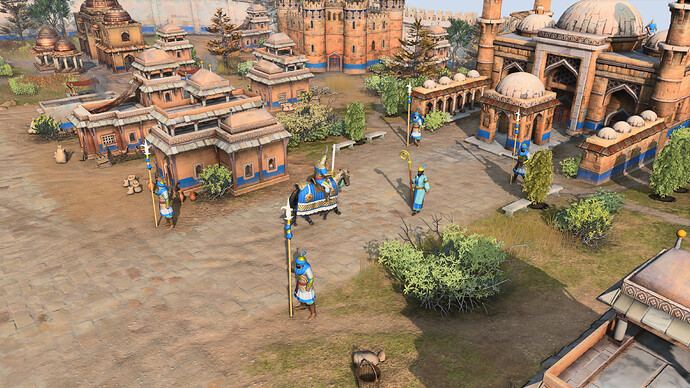 This is the kind of graphics expected for an AoE sequel:

The colors are good, but everything(not just units) looks flat because of lack of sharpness(blurred and clean textures) and details on the textures + there seems to be a lack of shine on metallic objects.

I’m not going to bring forth unit x building scale because other forum posters already singled that out many times.

he colors are good, but everything(not just units) looks flat because of lack of sharpness(blurred and clean textures) and details on the textures + there seems to be a lack of shine on metallic objects.

I’m not going to bring forth unit x building scale because other forum posters already singled that out many times.

God, how the other picture is beautiful.
I would like AOE 4 graphics similar to Figure 2

I get that they wanted more readability but they went way overboard here.

It’s not worth killing the graphic style imo.

Look at the weapons at the first figure. They look like toys.

It’s AOE 4 after all.
And it’s 2021
It would like something better graphically than AOE 2 and AOE 3.

I’m sorry to say, that reworking wouldn’t be possible with the time left.

I’ve however made a tweak, to some extent what I would think is a good compromise and also this unit looks great. Weapon however is something that could be tweaked, giving it more metal like colours like the helmet and the shaft being perhaps a bit toned down.

But openess is important. I think that the style is more akin to AoE series. Spellforce isn’t.

To be honest I like how the game looks and as long as it is balanced and fun to play I’m totally satisfied.
The game sure doesn’t have insane graphics but Age of Empires never was about that. I respect the opinion of those who aren’t satisfied with the direction they went with AoE4 but I actually liked it.
Can’t wait to see more and finally play it.

The colors are the least of the problems.

Speelforce doesn’t have anything much different than most of the games that try to be realistic. So I don’t think AoE would be “copying” them in any way.

The blurry textures and lack of detail on them + flat looking armor and weapons with no shine are really the core of the problem.

A simple change in saturation simply won’t do.

Games get delayed all the time, so I don’t really buy the “no time for rework”. That is very convenient for them to say.

A delayed game can eventually become good, but what we have here is almost AoE Online 2 which is unnaceptable for a lot of fans.

I certainly won’t be buying this game if it releases like this.

age of empires online is still playing right now and this one doesn’t look like aoe4.
You can’t compare Spellforce and Aoe. these games are not similar and i play both.
I like Aoe4, the gameplay looks nice and faithful to the series even the graphics are good even if there are still improvements to be made.
And like I always say it looks like age of empires fans vs age of empires fans (like star wars) when they got help from the community.
So strongly releasing the game, I can’t wait to play the beta and the game itself upon release.

Release in 7 month simply sounds unrealistic, the gameplay also need to be fixed.

Colors are a big part of the problem. It is about fitting artstyle with the game.

Games get delayed all the time because of polishing, bugs and so forth. Not reworking thousands of assets to look completely different. Do you realise how many hours, days, weeks, months that take? As a game dev I can say it is not easy.

AoE Online 2 has a completely different artstyle and is a hyperbole.

I’m sorry but if you don’t want to buy it, it is probably not for you anyway.

I dont play AoE zoomed in nearly enough to notice the details in the images above. Before being able to render an opinion, I am curious to see how those examples above look when zoomed out at actual gameplay altitudes.

Arguing that the textures aren’t blurry is like trying to argue that the colors aren’t bright pastel.

It’s in the picture, you just have to compare them to many other games out there at this day and age that have actually sharper textures.

Well, I played all AoE games but apparently AoE 4 “isn’t for me”.

The units and animations, not so much.

They look…chunky? And their colors look out of place/ like it’s a totally different art style from the world itself.

Now, in all fairness; Spellforce 3’s visuals can be a bit hard to catch details in, but I wouldn’t have minded some kind of middle ground.

It’s very naive of the devs wanting this to be a big hit like fortnite.

RTS is a very niche genre and will never have the same appeal.

If they want to dismiss a considerable portion of their fanbase because of greed, so be it.

I mean you said yourself that you didn’t want to buy it. Then it is obviously not for you if you can’t look past graphics for the gameplay.

I’ve used my eyes and for me the screenshots doesn’t show blurry textures. Remember that the videos suffer from compression a bit and could be played in god knows what settings.

From my experience with texturing and modding, you have to achieve a fine balance in sharpness and detail.

Too much of it and you get eye strain when looking at everything from afar.

On the other extreme we end up with what we see now.

Yes because the gameplay is not the only thing that matters. It’s also because of the motives behind the changes that turn me down from supporting this game.

Well, there were many other pictures where they show rubber like textures such as these, but maybe you’re right.

But anyone with a bit of experience with textures and modding will agree that these in the picture above are considerably blurry you just have to compare them to AoE3 DE.

Now, in all fairness; Spellforce 3’s visuals can be a bit hard to catch details in, but I wouldn’t have minded some kind of middle ground.

Precisely. I just used that shot for comparison. They went overboard with the “kid friendly” idea.

Obviously there were going to be divisive opinions on this.

I dont play AoE zoomed in nearly enough to notice the details in the images above. Before being able to render an opinion, I am curious to see how those examples above look when zoomed out at actual gameplay altitudes.

I hardly ever pay attention to the details on the units in Age2, you can’t see them really from an actual gameplay distance

Let’s not forget that Relic Entertainment made the disgusting Warhammer 40k Dawn of war 3 artstyle (well they did moba mechanic as well but let’s keep focus). they did a crap art design, fans told the problems and they just ignored and now it’s a dead game.
In essence, Art Design have a huge problem in relic entertainment and i fear that they may not listen to the community and shut down this game as well