Does someone got the patch yet? Any news'

The new patch with all the updates was supposed to come on 12th July, is 8.30pm here and nothing.

1.They claim they want to improve communication but they forgot to mention the time lol.
2. Based on US time is already 12th July there, they might consider America is the whole world and we all get it on 12th…

Relic is located on the North American Pacific Coast (Vancouver). It is reasonable that they work according to their time zone. It’s currently 7am Pacific time, and I would expect the patch around 10 am Pacific time.

moderator just posted likely 10 am PDT; citing that time as the microsoft and relic start of business time? then he deleted it so… I guess he either didn’t wanna get in trouble or the info is inaccurate??

May I expect them to mention the time?

Perhaps may they to consider this game is not ony in Vancouver but all around the World?

I dont expect them to start to work 7am, my post wasnt about that.

It would be nice if Relic would give us an exact time, but most gaming companies don’t do that in case last minute issues arise that delay t he patch.

But it Relic said “10 AM PST, July 12th”, it’s pretty easy for anyone to just put that into google and translate that to 2PM UTC or 11pm JST, as two examples.

They just posted that, with that information was more than enough.

That information was not here in the morning, afternoon, evening.

The only information available was July 12th, which for half of the world is going to be yesterday already.

In Australia for example they are paying for this game way more than for example in the US, different prices by country, same game. I think it would be nice if at least they are considered.

If an American company says “July 12”, it’s only rational to assume they mean “July 12th, American time”. For another example, I sometimes look at Genshin impact, which is made by a Chinese company, Mihoyo. If Mihoyo says that new content drops on July 12, I know that for me, in America, it’ll likely drop in the middle of the night either late July 11th or early July 12th

Hi @Shneider177, I do not know for certain either, so that is why I deleted my reply. Releases typically happen at 10am PDT but not all the time.

Just got the update here. 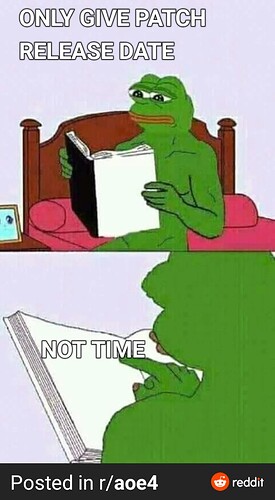 I found this to pretty relevant.

I feel sorry for aussies whos already hitting the new day by now.