This is because Landsknecht is USELESS! A serious developer mistake, this unit needs to be stronger in the final game for people to use it.

HRE have the Culverin which you forgot about. Really good.

If you are going to count Vanguards as unique, when they are just unique downgraded MAA’s, then I think you should count Unique upgraded MAA’s as well. The English has a unique upgrade, and HRE has two.

These are all MAA’s though, so I wouldn’t really count these upgrades and downgrades as equivalent to full uniques.

If we look at both Relic and AOE history we can see the crazier factions arrived in the expansions. Compare Company of heroes 1+2 base game factions versus the ones that arrived in expansions. AOE3 base civs versus the Warcheifs and Asian Dynasties civs.

I fully expect that DLC for AOE4 will follow that trend.

Is this strictly a feeling borne from the lack of unique units?
(no one seems to be complaining about china in that department)

Not just the number of UU, Chinese also have a strong gunpowder troops theme with their unique techs, something other civs are quite lacking.

The Abbasid isn’t too bad with their unique tech and UU, but they are somewhat limited as Camels act as support units more than main stream units, you will end up with the majority of troops being Lancer or MAA.

The HRE feel little different to the English, and their infantry bonus isn’t strong enough to discourage people from using their Knight which has an awesome skin, btw. Also, they could end up with different versions of MAA instead of just one with different weapons.

I think civs are quite unique, I see people complaining that they aren’t asymmetric because of the lack of UU, as if that is the only way to make civs asymmetric. Imo, they would be waaay more asymmetric than AoE3 if the generic unit roster was fuller so you could add more bonuses and UTs to customize the units even more

Here’s a list of unique techs each civ has:
Notice that the Abbasids have a ton 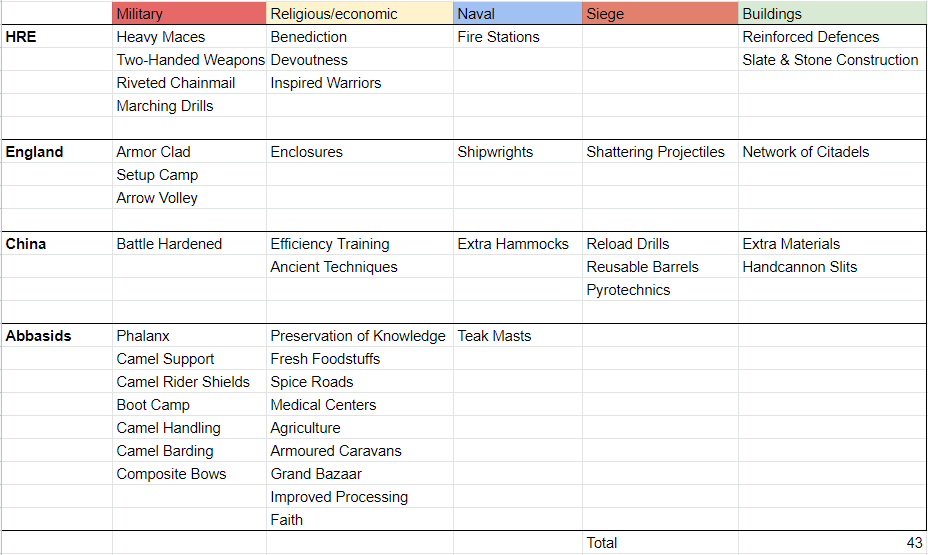 I agree, and it has got even worse with the last dlc.
I think the approach the devs took when it comes to units is fine because of the way the game plays out. And if some units are too weak they can always patch the game.

With all my heartache, the more you want it to be more like AoE3 or Mythology in some ways, the less it will be liked by most players, the less competitive it will be for balance, and the more it will be a flop.

The layout of civilizations is a correct middle ground between AoE2 and AoE3 and in the future civilizations that go along that line must be implemented. Edited.

This thread is literally talking about future civs.

I have corrected the last one, English is not my main language.

I agree, the last thing we want is having to deal with powercreeping problems.
AoE3 got to the point were they had to ban the 2 new civs from the esoc tournament.
If the core gameplay is intact there is always room for a lot more civs without many concerns for balance.

You know what, with the way they give extreme economic bonus to each civs like that, civs will just be as hard to balance as AoM.

And mind you, AoM wasn’t flop until the Titan came

I’ve been wondering what people’s take on the asymmetricality is actually.

Is this strictly a feeling borne from the lack of unique units?

I don’t think there’s a single answer to your question. It has to be a combination of factors that are weighted differently by each one of us. For me this sense of uniqueness and asymmetrical design dissipates somewhere between the absurdly large number of generic units available to everyone - something that’s contrasted to the limited number of unique ones- , their identical icons, their samey unimaginative naming and the civ bonuses that almost all of them seem to be narrating the same story in different words.

Civs in AoE are combinations of units, buildings, techs, and gameplay mechanics. Good civ design includes all of these things, tying them to real history and interesting and balanced gameplay. I presently don’t believe any civ in AoE4 does this particularly well in comparison to other age games.

Mongols come closest in my opinion.

The biggest problem with the Atlanteans was unit balance (ah, the days of constant turma spam), which could have been fixed with patching. In essence what flopped AoM balance was a lack of support, in my opinion.

thank you for continuing to request that they add Native Americans, especially as a moderator, hopefully they hear you

They just want a “competitive” game, not a diverse game where it takes a year to discover every concept of the game. You play it 3 days and you already know everything.

Exactly. I was expecting more unique units from HRE since it is a confederation of multiple states.

the less it will be liked by most players

When SC-2 was launched the protoss had the ability ‘worm hole’ that disabled almost all of the opponent’s army. It didn’t exactly start out as a very balanced game. Competitive equilibrium cannot be achieved from minute one. That is no excuse to limit creativity.

I agree, the last thing we want is having to deal with powercreeping problems.
AoE3 got to the point were they had to ban the 2 new civs from the esoc tournament.
If the core gameplay is intact there is always room for a lot more civs without many concerns for balance.

Only checkers and chess can easily swing. The balance in AOE-3 is more difficult than in any age game for the reason that it has the most creative design. It is a daring and innovative game (even still). Balance is something that eventually happens.

Balance is something that eventually happens.