Easy idea to pull up Russia from bottom tier

Just let their Blockhouse is able to train vils.

Russia advantage is map control, but this is useless to the trickle civs.
They are weak at sieging in age2, bad military quality in late game.

So just give them a way to boom to fight against these trickle boom civs.

If blockhouse is training vils, it is not able to train army, very fair.

How much would they cost and how long is the train time? You are essentially offering a TC, but instead of having minutemen it builds units and it has a fixed attack of 25 rather than being dependent on villagers with less hp but half the cost.

If made a card like the British Manor Houses can train vills it wouldn’t be too good (might be too bad though). Someone smarter than me could probably adjust the train time (if necessary) and put it in the correct age. Feels like Fortress to me, maybe? Like, your early rush failed and you need a fallback?

I don’t know, to me it feels like all the villager related cards come too late. By the time I can send Adoption, Estates, etc, I feel like it’s too late to matter, but I’m not a good player.

Troll post, pls delete. Russia is strong enough. Other civs need nerf though, France, Sweden for example. Russia is being played in competitive and can do well vs strong civs like India and Japan, as proven by top tier players. Russia has great military quality actually, their units are cheap but cards make them powerful, trading units over and over is great for Russia. They also have great settler production and 10% cheaper settlers.

Also no one is playing China in competitive, always India or Japan since these are too strong aswell. China needs (small) buffs to compete. Aztec aswell, simply overshadowed by Inca.

This can be adjust, may be 1 vil once? even offering like a TC is not good as Trickle house.

Personally, I think the problem with the Russians is the mass training and the resulting weakening of the unit’s combat capabilities.

If they don’t get rid of Russia’s Strelet, they’re as many Musketeers as they survive, and this is a tough opponent for beginners.

I think it would be good to move the boyar card to age3 and adjust the number of Strelets production to 8, but give the 6 settlers start and the settler card.

Also, if we could make more useful cards some of the lesser effects on age4 to get their lost fighting power back, we could create a Russia that wasn’t obsessed with early attacks.

This article may be difficult for you to understand because I used a translator.

If it is hard to understand, please let me know which part it is it is.

I agree group training is an issue.

However, their eco not good, unit quality very bad, main unit strelet very short range, and because group training, they need too much food in a short time, this is also a disadvantage, one or two of these issues without buff, Russia will be still stay at bottom tier.

But their unit price is definitely cheaper than other civs.

It just doesn’t stand out because of the unit’s performance and mass production.

I agree, but population is also one type of cost, moreover they can’ be trained before you have enough resource.

That’s why I said we need to cut the production of Strelet to 8.

This will reduce the power of the initial attack and solve the problem of Russian pops.

I think instead of weakening the Russians’ powerful early attacks a little bit, they need to allow them to start with 6 settlers with a settler card and give them a little more leeway in their economic power.

According to your logic, ONLY TOP 1 player has right to decide the balance.

Don’t put words in my mouth, strawman arguments don’t help you either.

Also your example is not correct using Russia vs India/Japan, Lakota almost lose when facing Japan, why Devs decided to nerf Lakota not Japan.

This reinforces my argument, Japan should be nerfed and from the poll most people seem to agree.

You have wood trickle and the best Age 2 politician, 400 wood. Your settlers are 10% cheaper and trained in batches. You will simply gain value over time because of how Russia trains settlers.

The Russian Halberdiers(Halberdier (Age of Empires III) | Age of Empires Series Wiki | Fandom) and Musketeers cost 25% less than other civilizations but have 20% less hit points and attack.

No one forces you to make Strelets. You can make Musketeers, Kossaks and Falkonetts. Kossaks are only 1 pop and upgraded by cards, they are very strong military unit for their cost.

You don’t seem to understand that Russia*s strength lies in their cheap, but efficient units. Maybe you lose games to a single push and you think that Russia is weak, because you lost all your army once and then you lost the game. But in reality, Russia wants to keep trading units with the opponent over and over to gain value. You want to be fighting a lot and both players lose units, you will come out on top.

Please, come on. Group training is what makes Russia Russia. Got to keep that.

Don’t put words in my mouth, strawman arguments don’t help you either.

So what is your reason to say I am trolling, don’t beat yourself.

You don’t seem to understand that Russia*s strength lies in their cheap, but efficient units. Maybe you lose games to a single push and you think that Russia is weak, because you lost all your army once and then you lost the game.

Again and again, don’t put what you think on me, this just beating yourself.

One more issue, please don’t always mention pro can solve that, pro has no problem, they don’t have problem don’t mean this balance has no problem.
take an example 1000 people are playing the game, give you 100 guys are pro, so how about 900 guys left?
If you think this is no problem, just let Sweden when they reach age4 will be AUTO WIN. this would be also balance. BECAUSE PRO CAN SOLVE IT AND PREVENT THEY AGE UP. 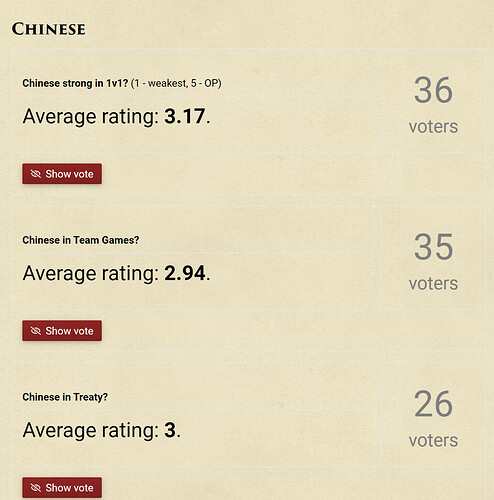 image1437×1453 306 KB
Please see what public vote, talk according to the figure not only with BLA BLA BLA saying I am noob or I don’t know how to use Russia sth is my problem.
What “advantage” you mentioned that 25% cheaper but only 20% lower quality, this is not an advantage.
All cheap unit civs are at the bottom.
I don’t know how come you get the point Russia is strong. Again pro can win is not equal those civs are OP.
Pro can use China win my Sweden, so China OP?

Why don’t you say you don’t know how to deal with Russia?

However I admire you because you can see the figure and Russia is at the bottom, you still can say they are very strong.
This needs to be very brave.

I understand why people would think russia is weak.
Their strength lies on having a strong early pressure and keep the oponent contained while they slowly creep forward on vill count.
When it comes to age 2 fights russia is already very strong, I would even say a bit too strong as they can get a massive cost effective army and overwhelm the opponent due to their numbers, so their age 2 definitely shouldnt be buffed.
That being said, when it comes to playing on the fortress age then yes , i would say their age 3 could use a buff.
They have to spend 1.2k resources to upgrade their cossacks, streelets and their musks, and their units don’t do well from there. Streelets are worse than skirms, their ranged cav is not as good as dragoons and so on.
If they really need a buff maybe making the cost of veterancy cheaper or/and giving x2 range to veteran streelets may be the way to go.

They have to make a reason for the Russians to lead the second half of the game.

Everybody would agree that their initial attack was very strong. So they’re going to have to reduce the number of Strelets production to eight and move the Boyars cards to 3 or 4 ages.

Instead, they will have six settler starts and settlers cards, and Strelet will have a +1 range for each veteran, guard upgrade (total 16).

Also, cards with weak effects such as the Strelet Horde and the National Redoubt make more effective.

To make them not obsessed with fast attacks, need to give them a different reward to continue the game.

put production on strelet to 8 and russia is even more weaker.

So guys, following my suggestion.
We know that Russia is strong in early age2, in my suggestion, if we choose to train vils in blockhouse, we lose strong early age2 timing, but it gives Russia better eco for mid/late game.
One of main point, Russia still relies on food deeply, if they lose food control they almost lose.

Even with this buff to Russia, they still worse than trickle civs.