Is there any torrent out there for similiar RoN and AoE rts like Empires: Dawn of the Modern World???

Please send me the link down the comment section below.
Here’s the pic;- 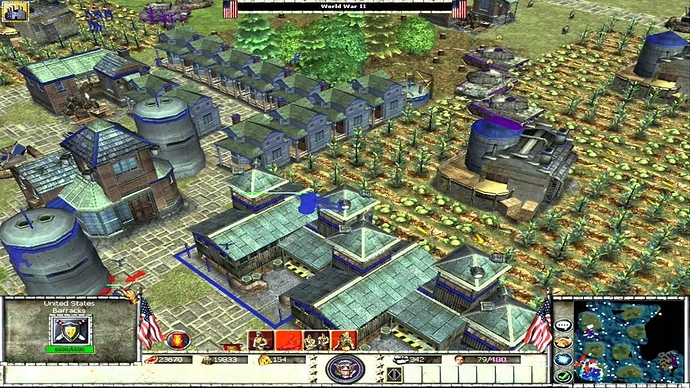 Why do you need a torrent for it? It’s available on gog.com …

I still have it on CD.

Thanks I downloaded it.

So guys I just played Empires Modern World RTS. The graphics are quite better, the details were awesome and well elaborated, has more variety of units, infastructure then RoN, Age of Advancement are awesome and limited Medival to World War II. One of the things I liked is that the rts has both WW1 and WW2 ages. Map choices selection menu are awesome shown in samples. Picturesque deep rooted zoom in and zoom out capacity. Nice 3d graphics, detail of units and infastructures. One thing is heaviest downside of this game, the combat and action among the units is very poor and very sluggish. Military operations wise this rts is very poor. This make the entire gameplay of this RTS very boring to play. Although Campgains are very intreseting in this game starting from the medival to WW eras and there is also an multiplayer iotion in this game. RoN still a dominant rival against this RTS. AoE is not a challenging rival to this RTS because AoE has very limited gameplay features and graphic detail features as compared to this RTS. But AoE like RoN has much brighter graphical enviroment then this RTS. So what’s yours take on it???

I’m… not sure what you mean by “AOE has very limited game play features”. AOE 2 at least is one of the most fully rounded and well balanced RTS systems out there (and for the love of god, no one come in and start shouting about Starcraft or E-sports, I do not give a ■■■■ about e-sports. This is as far as players playing with friends and in general enjoying a game play system).

When I say I feel it’s well rounded and balanced, I refer specifically to just how many approaches you can take towards your army and city. I’ve also found the combat in AOE 2 to be surprisingly deep and engaging, even in the face of latter day RTS titles. Ambushes, flanking and siege warfare all play such huge (and effective) roles. Compared to other contemporaries like, say, RoN or even Sins of a Solar Empire, it feels like what you do with your forces matters far more than “how many”. Also, I’ve found that it’s one of the few systems in which being on the back foot does not instantly mean game over.
(yes, I do personally lump Sins into the same category as AOE and RON. Despite the attempt to market it as a 4x RTS, I always felt like the basic principle was the same).

With regards to Empires: Dawn of the Modern World, I admit that I only played it -years- ago when I was still in school. Back then, I thought it was nice and fun, but it still didn’t hold up very well next to AOE 2, or even RON (which itself feels like a step bellow AOE 2 in terms of combat). The thing about Empires is that it feels like it’s trying to bridge the gap between AOE and Warcraft, with individually activated unit special abilities. It also suffers from much the same issue that 3d RTS games of the time did (and especially Empire Earth); the visuals look atrocious. They simply do not hold up as well as older 2d titles…