The issue at hand is that in the statistics screen after I completed the mission showed that Moldavia ended the game with -1 relics. I have no idea how this happened and I wonder whether anyone else has had this bug before. Any explanation for it would also be appreciated. I like to read.

This was in a campaign mission which I only played once so technically it only happened once but it was 1 out of one times which is 100% of the time.

I’m not completely sure what caused the bug so I can’t really give precise steps on how to reproduce it. I can say, however, that in the mission, ownership of buildings change whenever you capture the torch near it. One of Moldavia’s monasteries was in the trigger zone so when I took the monastery off its hands, I placed a relic inside. When Orange took the ownership of the monastery back, the relic dropped out of the monastery and I had to put it back in there when I got the ownership back.

I tried to watch the recording but even though I’m on the same build, it desyncs after 8min20. I did find out that Moldavia starts out with two relics, one of which in its home town and the other one in the monastery from last paragraph. In my attempt of the mission, that monastery in its home town got destroyed so he would have 1 relic and I assume that with the change of ownership twice that the stat somehow got reduced to -1 instead of 0. 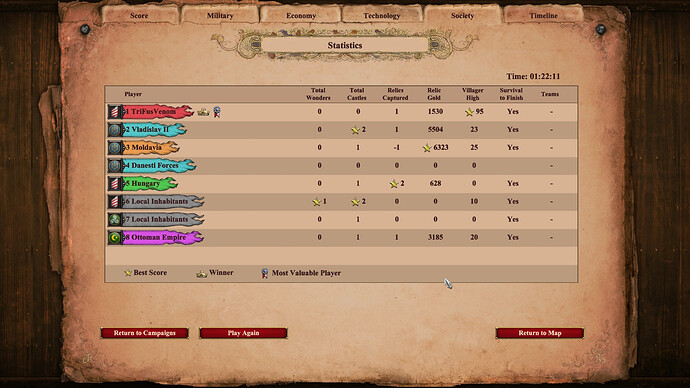 Both the direct upload and external upload service don’t want to accept the file for some reason. If anyone has a solution for this, let me know and I’ll upload the file.