I got fake gged on Arena with bulgarians vs Britons a few weeks ago. He was typing GG but started a huge Counter Attack with Forward Castle! He had much better eco but I had all artefacts and could somehow win by keep him of the remaining Gold. You got fake GGed or typed GG with the porpuse to set a trap and keep continue playing? Whats your thoughts on this?

What you should do is type that you have “advanced to the Imperial Age” in the chat to make them think you’ve aged up when you haven’t. /s

Regardless if said he “GG” he still won. Did you relax and sit back when he said “GG”, and keep pressure off him?

Sure, it’s a little under handed tactic. But I’m not sure if he did anything wrong.

Also “smart” move. But i think that a fake GG is more out of Line.

No he lose in the end. I somehow sense he would not quit. I also saw his forward castle in cunstruktion real quick. he was also quite a head in points still I think. I personal think a false white Flag is over the Line.

It happened to me once, though i’m not sure my opponent may have been trying to announce he won.

He also hid vills at the end.

Well you can explore them just in case you dont know. In imperial age in your castle.

I personal think a false white Flag is over the Line.

Lol, that is where you draw the line?

Dude, there are so many other things in this game that people could do, and an ambigious “gg” is where you cry foul?

This is literally a game about war & deception. My hat goes off to him for trying a unique way to gain an advantage that is within the limitations of the game and is not illegal. You don’t even know if he was trying to trick you, or if he was presumptuous in thinking it was GG for you because of his counter attack.

He is not the first to do so, and will not be the last - even the pros do stuff like this: 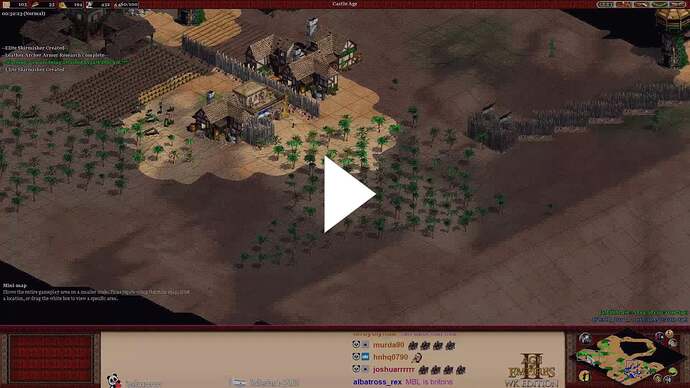 My advice to you is to not take it personally, learn from it, and move on.

Who says I took it personal. It does not even make sense to take it personal vs an anoym player. Which pro did such thing? None of the real good I suppose. The reason here that the GG is the line is that it is just common agreement that the Game is finished it has to do nothing with Age of empires. It is generell practice for all Multiplayer Games.

You should check your manners Bro seems like you are overcompetitive in the wrong way. The Daut thing is a total different Story.

Who says I took it personal. It does not even make sense to take it personal vs an anoym player.

Then you need only learn from it, and move on.

Which pro did such thing? None of the real good I suppose.

Well MBL did (in the link I shared above), and he just got second place in the King of the Desert 3 tournament and will take home $9,000 … so yeah I’d say he’s pretty good.

The reason here that the GG is the line is that it is just common agreement that the Game is finished it has to do nothing with Age of empires. It is generell practice for all Multiplayer Games.

Which is why it worked as a successful strategy.

You should check your manners Bro seems like you are overcompetitive in the wrong way. The Daut thing is a total different Story.

I merely am providing a different perspective, I am sorry if you were offended by my response. It just seems humorous to me that something as small as a chat message in-game (whether intended in jest or serious) which can be easily ignored (where people have said much worse) is, as you said, “over the Line.”

You can be a snitch if you choose to. i am not offended by it. i keep playing anyway just talking about game ethitics in genrell. If you have to be that try hard thats your problem not mine.

Its getting common guys, they type gg and then play a counter attack after 30 sec -1 min.

dont let your guard down when you see gg.

Offensive GG in Starcraft II I’d argue probably is way more common than in AOE2, although don’t quote me on this one.

Being in a war, psychological warfare is also a thing. Throwing your opponent off means you gains the advantage. Granted, in SC2 tournament such chat is not allowed, but yeah.

Learn from it and move on. That’s I have did. Instead of letting my guard down, I would start to suspect hidden bases, dark templar, sneaky drops etc.

A video game is not a war, even if thats the setting, its a sport and such behavior proves bad sportsmanship.

While it’s a perfectly legit move strictly speaking, it feels just like “bad manners”. In the end we are playing to have fun, so I see no point in doing this.

I would say it is a sport. In Soccer, if you see faking injuries is not that bad but not sporting. Same in AOE2. Faking should be a non-sporting move

Not everyone thinks that way though. BM or not, things like this happen. In tournaments, there are rules to regulate such jerk moves, but outside of it, there’s really nothing much we can do.

I still stand by the suggestion of learning from it and moving on. Heck, you can just quit and give the opponent elo while saving your time to do other things.

lol reminds me of "sooo good " cheat code from aoe3

sure, I just disagree with the argument “it is war […]” because thats just not what it is, and people make these arguments for video games way too often.

Its possible the guy was saying gg because it was his final last ditch effort forward castle. Sometimes people do yolo strats like that that are 99% guaranteed to fail when they sense there is no other way to win. The fact you still won makes me think that was the case, and he was probably just surprised that his push had any effect at all.

That said, I agree, GG really should be followed immediately with resigning. But ultimately it’s just a sportsmanship thing. Nobody is required to type anything to anyone if they don’t want to.

I’d say if a guy GGs then keeps playing, it’s in your right to hit him with a 105. Haha