Figuring out source of Lag

Hi. I am trying to figure out why I keep getting opponents complaining about lag and blaming my internet and/or pc and often complaining of the FPS. I’m plugged in to an ethernet cable with over 230 mbps upload and 11 mbps download. I have a fairly new computer so I thought it should be fine but here are its specs. 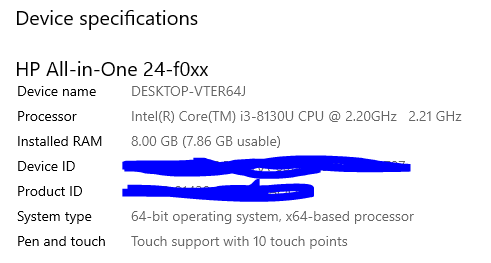 Can anyone see the source of the problem from the screenshots? And any recommendations?

I am considering buying another computer for the sole purpose of playing AOE 2 DE and possibly AOE 4 and would appreciate any recommendations for what to look for that would be both affordable and operate the game at a high speed. Preferably capable of processing a full multiplayer game of 8 people on the highest graphics settings although that might be a stretch considering I am trying to keep the price below $200 for something used. I just thought with it being a game made in the 90s that just about any computer these days should be able to handle it.

Can anyone see the source of the problem from the screenshots?

Your system is way too weak.

You don’t have a dedicated GPU, also you are playing in a low power consumption device, meaning lower CPU frequency=low IPC=bad performance.

Thank you for the feedback. Can you recommend a cheap option that meets these requirements?

That is referring to competitive 4v4 ranked team games.

For campaigns and 1v1s your existing system might be okish, if you add 8gb of ram and make sure it runs in dual channel. Because the gpu will share with the main memory.
I don’t know if it is possible to add the ram tho.

Hardware is really expensive right now, because there are shortages for supplier parts on the market for 2 years already.

I don’t want to but any hardware. I was hoping to just buy a cheap desktop that could run the game smoothly but it looks like the graphics cards alone are over $200… and from what I can see most desktops don’t come with a graphics card - its more like an upgrade specific for gamers.

Its not the best time to buy computer hardware given the scarce of the chips, everything is over priced, you should try to look for something second hand.

However the cheapest options right now without buying a dedicated GPU are the intel i3 11100 or i3 11105 both of those cpu have really high IPC, they are cheap and their integrated graphics are enough to run the game, just buy a cheap and compatible motherboard, that cpu and 16 gb of ram, you also look for the i3 10100 but the igpu of that cpu isn’t that great, so i’d stick with the 11gen.

Second option, you can also buy the 10100f, a cheap motherboard, 16 gb of ram and a gt 1030 which is the cheapest gpu right now, but if you can look for a second hand GPU you could get a better option rather than that 1030.

Or you can buy for a prebuilt system with a ryzen 3 4350g or superior models.

No, you still need a graphic card for this pc. Also this pc is pretty outdated already. :-/
I would set the graphics to minimum, disable all mods, close all other programs on windows and play 1v1s.
You can buy a new computer later.

Could you please send a couple examples of what would work? Like a link to an ad. I’m having trouble finding something that fits the description you provided and I dont know where to find the IPC spec…

What you suggested sounded almost like I needed to buy separate components but I was hoping to just buy something already assembled and ready to turn on… I dont know how to put computers together.

I would set the graphics to minimum, disable all mods, close all other programs on windows and play 1v1s.
You can buy a new computer later

Yeah probably what I’ll do… are you saying because of covid ita not a good time to buy one? Or its better to just save up and get something nice?

Then what is your country in the first place?

I actually looked into the component charts and available computers on ebay etc.
Any computer with amd ryzen 3200g or better, 16gb of ram or better, and a ssd is fine.
The most affordable way would be to buy a tower pc from lenovo, hp or similar.

Thanks for all the help!