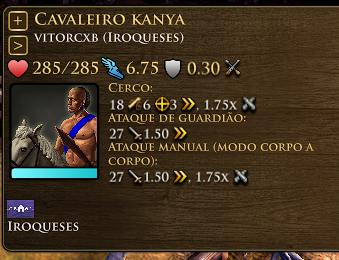 I would rather just let Kanya cost gold, haud is very awkward when you want to start thinking about aging, absolutely none of your units cost gold in age 2, so when you want to think about aging your basically asking yourself if you can afford having your villagers on a resource that you can’t spend on anything until you hit the third age.

I would rather just let Kanya cost gold,

Yes. Being the only Hand Cavalry that costs Wood is already a huge penalty, and they have neither the stats or the alternative unit to justify it.
It is a bit silly that it costs Wood, when Hauds already send a lot of Wood in everything else…

As an Haud main, I can say that it is good that it costs wood, I have no problems with that. But as I said in other topics, the Iroquois need yes or yes a letter that converts wood costs into coins. Ultimately, if there are social problems due to a change like this, an alternative must be sought, such as giving the natives a third resource that is not necessarily coin, but that fulfills its function.

I disagree.
Kanya costing Wood is teh eason no one makes Stables as Hauds. There is also no reason for a primary Hand Cavalry unit that is similar to a Hussar, to cost Wood.
It is not like you have another alternative specially in Colonial.

That explains why I win so many games with these bad boys, no one expects them hahaha.

But hey, seriously, if you compare them with the Hussares, they are weaker, yes, but they have more resistance at a distance and if to that you add the influence of the WC they overcome this weakness. In the early game they are quite profitable, and luckily, if you go to a colonial battle, you only collect wood and food, in the long run like any normal game if you go to fortresses, they are still useful for tank units at distances. In the late game they already become a problem, because as you argue, the cost of wood goes from being an advantage to being a disadvantage. All that has been said, it loses sense if it starts to cost gold, you will have to have villagers distributed in the 3 resources, not to mention that until you reach fortresses, you only have one shipment from the metropolis that improves the collection of gold,
and therefore, with this change, instead of injecting more use in the game, you are only making it more complicated.
Conclusion, give the haud a fortress card that turns wood costs into gold plis.