Game back to crashing?

Hey community… Since the patch DE has been running smoothly (no crashes, faster load times, no lag at the start of match), but then today it starts crashing again. Four times over the course of four hours. Has something just changed that’s causing this again, or is it just a matter of luck at this point? Really frustrating when you’re trying to play with teammates…

Edit: Its the crash where the game freezes, then exits to desktop: no warning, no error, just shuts the game off.

Why DE, why… it was going so well…
It has to be a memory leak somewhere in the code, right?

Exploring fixes, because I love this game and really want it to work, came to this fix - 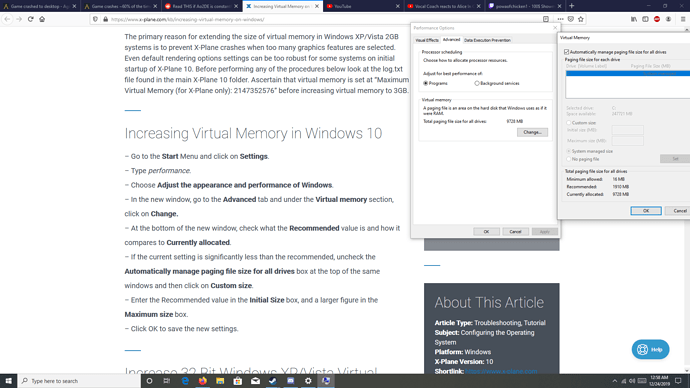 r/aoe2 - Read THIS if Ao2DE is constantly crashing for you...


And the reddit post dedicated to this particular crash. As the man says - “Nothing like needing to have a pagefile that is 70x larger than the original game was…” Should we expect this ‘memory leak’ to be fixed in the near future? Ty to anyone who takes the time to read this- Grandmaesterwookie
Will update if this worked.
Tempires December 24, 2019, 10:31pm 3

It might be according to one of the devs.

The game runs more or less smoothly until someone reaches castle age in a multiplayer match. Then my game freezes for a sec and then closes. My PC specs are way above the necessary and recommended specs, and it doesn't happen to anyone else in the...

I’ve also gotten more crashes today. They seem to happen shortly after I hit imperial. I get no error notifications. The game just freezes for a tic and then it closes.

Update : I’ve only played 1v1 since trying this fix, but no crashes yet: feel free to give it a try, its easy to reset (hopefully I’ll be able to after some updates fix the crashes, I’m no computer wiz so I’m not really sure if the setting might negatively effect my computer.) Thanks to the guys who figured it out!

I don’t get an age up crash, it happens at random times and just quits to desktop with no error messages, though it will stutter for a split second and freeze when its about to, looks very much like a memory leak if I’m understanding them correctly.

I just had a crash as I hit imperial I think

Yeah, same thing is happening to me here. I crash as soon as I hit imperial.