DESCRIBE THE ISSUE IN DETAIL (below). LIMIT TO ONE BUG PER THREAD.
When I create a lobby the game crashes. Even after reinstalling the game the it still crashes. Deactivating Mods etc. also does not help fixing this. Furthermore when I create a lobby my old nickname is set as default. I can create party in ranked or Quickplay though. It is also possible for me to enter lobby games.

What was SUPPOSED to happen if the bug you encountered were not present?
I could create a lobby without causing the game to crash. 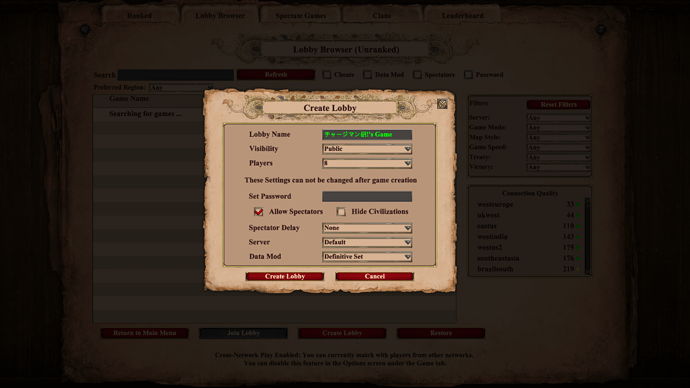 We fixed that bug. The problem was the Japanese name of the lobby. Since my steam name was written in Japanese katakana the lobby name was also automatically in Japanese Katakana. For instance if Viper creates a lobby for the first time it is named ‘Viper’s Game’. We could also not change the Japanese part of the lobby name (see in the picture). For changing the default name ultimately we restored a game (that worked for me) and set the name to any random name. Then the default name of the lobby changed and finally I could create a lobby.