Game Occsaionally Picks a Different Civ than the one you picked

When hosting a lobby or joining one, and selecting a civ, very rarely, upon launching the game, you will instead be playing as a different civ. It is very infrequent, and has only happened twice to my recollection. Another time it gave me the Vietnamese instead of the Bohemians.

You would actually play as the civ you’ve selected. 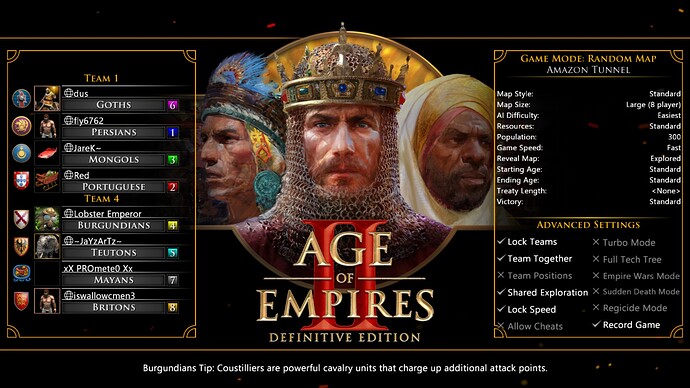 Here is me with the Burgundians, even though in this lobby I selected the Bohemians. This was from a lobby I hosted, as was the other time this happened.

And this happens only with Bohemians? I remember picking Bohemians and it gave me Incas. This same thing happened to a friend of mine, except it selected Britons for him.

thanks for the reports, have you observed if this issue happen to you just with the DLC civs or it can happen with any civ? could you also send us the game replay from the host or the person who has the issue so we can investigate it further?

From my recollection, this issue has only happened twice that I can definitively remember, and possibly one other time, though I am hazy on the details due to it being so rare. The two times I can definitively remember both specifically happened with the Bohemians, giving me the Vietnamese one game the Burgundians the next, as the screenshot suggests. I do believe that it also happened once when I was attempting to play as the Burgundians, but I cannot confirm on the details as it was a while ago. So yes, it seems to only have happened with DLC civs. I got the Dawn of the Dukes for pre-ordering Age of Empires IV, if that may help.

When you ask for a replay, I don’t know what you mean? Do you simply want a recording of the replay, or is there a way that I can specifically upload a replay that will be of any use to you? Someone also dropped from the specific game in which I took this screenshot, so it’s incredibly short since we all agreed to rehost. If there is a way to provide it to you that is helpful, I will definitely strive to do so.

If you’re asking for a recording of the issue happening, I’m afraid I don’t have one, nor would it probably be feasible to get one, since the issue is so rare and doesn’t seem to have a consistent way of replicating it.

Thank you for responding!

Yeah this is crazy, seems to happpen mainly in 2v2 games

This happens allot in the scenario editor

Hey guys, how often does this issue happen? It doesn’t happen in ou tests, but it would be really great if you could take a screenshot video of the issue happening, if it will happen again.
Thanks for the help!

The above screenshot I’ve posted shows the issue in action (not that it shows much). It’s really hard to find a video of this in action because it seems totally random when it happens. And yeah, the issue is incredibly rare. I’ve had it happen 2 times confirmed and possibly a third time. And I’ve got over 300 hours in AoE2:DE, so it’s absurdly rare. Hopefully you eggheads can find it and fix it, and I’ll definitely try and post more screenshots if it ever happens again.

Often happens when just testing scenarios for me - for instance I’ll pick Teutons, have player 2 as franks, and player 3 as byzantines and have player 3 allied to gain the civ bonus. First time most of the time the civs are the correct civ - but when I go to add units and start the scenario again to test further all the civs of every player changes even if I press lock civ and the previous civs still being selected. It also randomizes the civs each time I retry the scenario

Noticed I’ve been selecting architecture instead of civilization, I’ll let you know if it still happens but I’m guessing not likely for my method here