I am creating this topic for all players who are not happy with any changes that Patch ESOC has made. If you are not happy then we need to say exactly what is bothering us, it is not enough to just say that it is bad or that we do not like it, if we want changes we need to make constructive criticisms!

So I want each player to make a list of what they think the EP has changed in relation to the original game that I would like it not to apply.

This topic need not be limited to that either, and we can also say general suggestions for changing the balance, either from the original game or as it is in the ESOC Patch. However, I would like this topic to be restricted to questions of balancing civilizations, units and cards, and not desing, anti-cheater, graphics or others.

Just for reference:
This is the ESOC Patch:
https://eso-community.net/esoc-patch.php

———
Read first ^
———
Warning.
Below is only for overambitious:
For Card Reference:

You can put aside any of the above,
no limits, no restraints.

–> The Buff or Nerf of civilizations must be made by changing their basic rate of collecting all resources, just like the Handicap effect. That way it is possible to keep civilization bonuses virtually untouchable, and it would be fair for all civilizations. This undoubtedly, I believe to be my best idea for the general balance of civilizations.

–> A civilization’s Nerf or Buff decision must be based on Winrate competitive games. The sample of “25%” of the best players can be used, or another% value that seems appropriate. If a civ has a winrate much higher than 50% it must be Nerf, and if it is far below then it must be Buff. The choice to counter civilization will not affect statistics, if the opponent does not know which civilization he will play against before the match starts.
–> Macehualtin, Yumi, Longbowmen they need to receive 3x vs heavy infantry in some way, either by card like Gurkha (Royal green jackets) or by Counter Infantry Rifling, or otherwise.
Saloon Age 1 = Monastery
–> Royal guard updates must cost 800f 800c to be commensurate with normal guard updates.
–> Saloon needs to be able to be built at age 1, as well as the Monastery of Asian civilizations, so you can know which mercenaries are available before choosing the deck.
–> Spahi and Urumi trainable in the stable and barracks, with a fair price and population. As an initial suggestion: Spahi 250f 250c and 5pop, and Urumi 150f and 150c and 3pop.
–> Native civilizations need compensation from European factories for late game. As a suggestion, 2 cards with Warrior Priests could be created, and if the player leaves this one they will not be able to recover them, as well as the factories.It shouldn’t cost population. The Aztecs would need to be adjusted in some way, because they can already create this unit at the stake.
–> Plantation cost for 400w.
–> Cuirassier needs some kind of Nerf in the game late. I honestly don’t know how to do this, maybe an alternative will be to apply a small training time Nerf along with the Thouroughbreds card.
–> Add a small multiplier against heavy infantry for all heavy hand infantry. In this way they would do reasonably well against musketeer-type units, and would remain the same against the other units. I don’t know the fair multiplier value, because I haven’t done the tests yet.
–> The Dance Hall card must provide a specific mercenary for each civilization, as well as Asian civilizations, and this mercenary will be the option of the guard and imperial update available to be made.
–> If the Dance Hall change is applied, then the effect of the Improved Mercenaries card could be reduced to 15%.
A vote could be taken, or another way to choose the mercenary of each civilization.
–> German civ: Move the Long-Range Infantry Hitpoints card to age 2, so that they are useful for Crossbowman.
–> German civ: Change the negative effect of the Soligen Steel card to make the Doppelsoldner cost 33% more. Reducing speed makes the unit useless.
–> German civ: The Spanish Riding School card applies 20% for Warwagon and hold 10% for other cavalry.
–> Mamelukes, Elmetis and Lil Bombard need to be available at age 3 in the same way as other mercenaries.
– > The price of all mercenaries would need to be recalculated in order not to have OPs or weaknesses.

German civilization is my favorite so more suggestions for change were for it.

Here are some various New Card ideas for the ‘Dutch’ Civilisation.
Most of these cards considers the Dutch Civ’s challenged state in the Colonial Age but also valuable gains in various other Ages.

Dutch (Mercenaries)
Reason: Mercenaries are historically accurate to use for Dutch as per their History:

The wall doesn’t really do much for competitive players. Why should it be reduced to 1500?

Why does China weaken but not strengthen? If you change that, China will have to ff.But actually China times 3 is not weak, China is weak in times 2, hope you can strengthen the combat capacity of his times 2, the weakening of the wall, China is more difficult to play!

In fact, most players are just for fun, balance is the second, not everyone like this kind of competitive game

Are you saying the game should be balanced around players who play just for fun and don’t care about balance? That is generally not a good approach to balance any game. You have to balance mainly at the competitive level, because that’s where it actually matters - as you’ve correctly stated yourself.

balance matters for fun though.

balance is a hard thing to do, usually its not a bad idea to go with what competetive players say but you shouldn’t do that if it alienates the rest of the player base.

like i play treaty a fair bit and i know there are some balance issues there i would like to see changed/improved but if the balance team only cared about 1 vs 1 where tournies are played then the issues my part of the community face wont be adresed and i think that would be a shame.

take france, a pretty medium faction in 1 vs 1 (from what ive read) but they are broken in other game modes, so clearly france should be nerfed, it can then be given buffs in the earlier stages of the game to still make them viable for rush games.

I believe balance should exist amongst all players who partake in a game.
Amongst Competitive Player Groups and amongst improvisational fun-build buddies.
And in some grey-zones of communities inbetween.

A New Building feature of the half-forgotten building: Livestock Pen

I would love to see the livestock pen get a little more love, and some auto-generating resources sounds like a great way to get some more use out of it.

I used the ep patch. It was great.But I really think the British are too strong. Can we weaken them? The most important thing is that I won GiveUAnxiety with Japan. 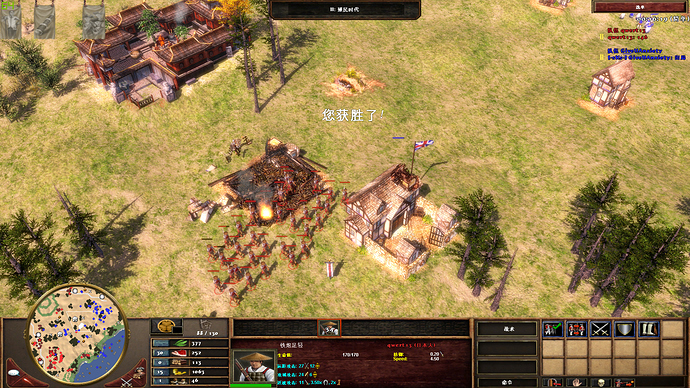 If balance is to be maintained, India must weaken .There are maps where India is too strong.India can be invincible with a map of cattle and sheep.

Actually, it’s really hard to keep balance, even the game like Dota2 also have to update frequently. So it’s seems impossible to get perfect balance both in convention and fast games at once. How about prepareing two edition, one is for convention and the other is for fast games. The difference between two edition is only dates, don’t needs to change models.
PS India is really OP😭